One of the slogans of the ELCA over the last couple of years has been “unity in the midst of diversity.” This unity has been so important that it even made it into the proposal of the task force presentation in 2005 when we discussed the blessing of same sex unions and the rostering of non-celibate clergy. The resolution was, that the Evangelical Lutheran Church in America—its members, congregations, synods, churchwide organization, and agencies and institutions—be urged to concentrate on finding ways to live together faithfully in the midst of disagreements, recognizing the God-given mission and communion that we share as members of the body of Christ.

What are the disagreements that we have that endanger our unity so much that we have to make resolutions promoting living together faithfully? After I attended the 2005 assembly it became clear to me that the disagreements were not just on matters relating to human sexuality but had to do with a different understanding of theology or what I would call a new gospel. After attending the 2007 church-wide assembly I now realize that not only does this new gospel exist, but I now believe that because of this new gospel we cannot have a unified church.

I say this not to be overly dramatic or divisive; I say it simply because it is the truth. Our Lord himself said that a house divided against itself cannot stand (Mk 3:25) and Saint Paul likewise condemned the preaching of a new gospel (Galatians 1:9).

Now, first of all I need to define this new gospel and how it differs from the gospel of Jesus Christ, as revealed to us in Holy Scripture and the historic witness of the church catholic. Consider this excerpt from Susan Hogan/Albach’s story in the Chicago Sun-Times: “The nation’s largest Lutheran denomination on Saturday passed a measure calling on church leaders to ‘refrain from or demonstrate restraint’ in disciplining gay clergy in committed relationships. A day earlier, church members meeting at Navy Pier voted down a measure that would have ended the Evangelical Lutheran Church in America’s celibacy requirement for gay clergy. Still, Saturday’s 538-431 decision was widely viewed as historic and a sign of shifting thinking on homosexuality within the 4.8-million member denomination. ‘It’s a huge victory,’ said Jeremy Posadas, a voting church member from Decatur, Ga. ‘The gospel of inclusion has won, and we’re going to keep win-ning.’”(“Gay clergy OK’d by Evangelical Lutheran Church in America” Chicago Sun-Times Online, August 11, 2007, suntimes.com)

Jeremy Posadas has succinctly identified this new gospel—what he has named “the gospel of inclusion.” Traditionally, some of us would refer to this gospel as “cheap grace,” a term coined by Dietrich Bonhoeffer. Others would call this new understanding antinomianism—a deviation of the gospel that Luther had to speak out against when people of his day abrogated the use of the law and celebrated Christian freedom in a way that was not healthy for the church or society. Some of the things that accompany this new gospel are the redefinition of some familiar words. In this new way of thinking love equals acceptance and justice means promoting and affirming whatever each individual has decided is right for him or herself. The human experience rather than scripture becomes the final judge. This new gospel is not without law entirely, but instead they have a new law which replaces the Ten Commandments—this law simply stated is that those who do not accept the new way of thinking are the “real sinners.” This new way of thinking, when it does recognize God’s explicit commandments at all, has also elevated the second tablet of the law over the first—preaching that we must “love” our neighbor without any counsel about how that relates to our love of God. In this theology the Spirit of God is disconnected from the Word of God, thus claiming that the Spirit is leading us in new directions that are not related to past revelations. Luther also ran into this type of thinking and he labeled those with this rationale “the enthusiasts.”1

In my training for the ministry I learned that our preaching always involves both law and gospel. The law, of course, is not the means by which we can earn our salvation but it certainly is the compass by which we are to live and a tool to learn about holy living. Because of this traditional viewpoint we have continued to teach Luther’s Small Catechism (the Ten Commandments, the Lord’s Prayer and the Apostles’ Creed.)

One of the chief messages that Jesus preached was that the Kingdom of God had come near—this gospel message is recorded in Matthew 4:17 when Jesus says: Repent, for the kingdom of heaven is near. This turning around that Jesus calls us to is good news because it reminds us that we don’t have to continue on the path we are on—we are not held captive by our sexual desires or any other proclivity—rather we are made new as we are embraced by this Lord of life who desires for us new life, life and life abundant.

As I heard speech after speech at churchwide assembly I became more convinced that we were speaking two different languages. A number of years ago Bishop Hanson quoted a seminary professor as saying that we have in our church two “equally valid” but irreconcilable hermeneutics. I quote the “equally valid” because I wonder how that can be true. How can some be preaching this new gospel and others the historical/confessional understanding of the faith and both be right? How long can we hold together this unhappy marriage of opposite theologies? When will we say enough is enough and declare that this new way of thinking is unfaithful to teaching of the one holy, catholic and apostolic church and those of us who want to remain faithful to scripture and traditions can no longer support a church body that wants us to move in this direction?2

Many do not want to give up the ship, so to speak. I have heard many from Lutheran Core and Word Alone and others say we must stay with the ELCA and be the ones who continue to speak out for orthodoxy in the church, and in many ways I sympathize with this way of thinking. I do not want to be a part of a renegade sect, however neither do I want to be like a frog in a pot of boiling water that doesn’t know that they should jump before they are cooked alive and eaten. What I saw taking place in Chicago was a tug of war. It seems to me that about 45% of those attending want to remain orthodox, 35% would like to revise our theology and about 20% fluctuate back and forth. (These feelings are verified in the patterns of voting that took place on various issues.)

The 35% that would like change are smaller in number but they are in control of our seminaries and our youth gatherings and are in many of the leadership positions of the ELCA. And so even though they are smaller they have great influence. As my earlier quote about the gospel of inclusion indicates they are encouraged when they see the tide turning their way and they keep paddling the boat in this new direction. They are often effective in changing the minds not only of the 20% in the middle by playing on the sympathies of many kind hearted souls with personal stories of pain (as if orthodox folk have no pain,) but also by name calling and manipulation they at times even win over some of the 45% who hold the traditional beliefs.

I sat at a dinner table while a bishop, a seminary professor and a pastor made fun of those in the ELCA “who don’t have the spirit,” joking that maybe they would spike the drinks of these sour folks. Who wants to be talked about like that? Some of the 45% are also being lost due to what I would call a slow leak—some going to Rome, some to LCMS, some to LCMC and others to whatever is the going church in their town. One lay voting member told me that he thought maybe he would continue to attend his local Lutheran congregation because the orthodox way was still being taught, but he would no longer be a member of that church because he could no longer support the denomination’s teaching of this new way of thinking.

Many of us also want to stay because of the children. We have two sets of children in this relationship. We have the real flesh and blood children to whom we would like to pass along the historic faith to—children that we want to have hear both law and gospel—children that we want to teach the catechism to…And then there are the other children that many of us don’t want to give up—Lutheran World Hunger, Lutheran World Relief, Lutheran Services in America, Lutheran Disaster Response, etc. Those programs that our church has adopted or given birth to that help us to live out our Christian witness in the world are important to many of us. We like the good things these organizations do on our behalf and if we are pushed out of the church we would hate to have to give full parental rights to those who are preaching this new gospel.

So here I am—at a great crossroads in my life wondering if I should stay in the ELCA and use my voice to perhaps speak to the 20% in the middle, and to encourage the 45% who want to remain faithful. Are there still those I can help to wake up to this important calling we have to stand up for the orthodox faith of the church? How important is it that the voice that speaks against these false teachings is a voice within the ELCA? Is there any chance that they will hear a voice from outside any more or less than they hear our incessant call to faithfulness?

And where will I go? Will those who want change in the ELCA have the last laugh as confessional women clergy flounder to find a faithful home that will accept women’s ordination? Perhaps, the best case scenario would be for an African Bishop to adopt those of us who are being abandoned by the ELCA. Again, I don’t want to sound like a victim, but I am also wondering at what point those of us who feel like sandbaggers will come to the realization that the flood waters are just too great and we must run to higher ground before we drown.

I am truly thankful to God for the hard work of so many at Lutheran Core, Word Alone and all those people who have not joined an organized group but who continue to pray and work for reform in the ELCA. We are very aware of the challenges that have come to the gospel in the past and we know that in spite of it all, God has remained faithful and still continues to bless us with his Word and sacraments. It is in his name, Father, Son and Holy Spirit that we move forward despite whatever befalls knowing that our Lord will not abandon us and that ultimately he will provide a home for the faithful in this life and a home in eternity for all who confess his holy name. 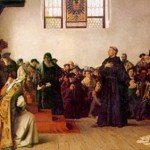