You are here: Home / Dealing with the Devil / Book Review: Reviving Old Scratch: Demons and the Devil for Doubters and the Disenchanted

In his contribution to Fortress Press’ “Theology for the People” series, author and professor of psychology Richard Beck makes an argument for Christians of all theological persuasions to reclaim language for the devil and spiritual warfare. Beck writes from a biblical perspective and based on his experiences leading a weekly Bible study at a local maximum security prison as well as worshiping and serving as part of his congregation’s ministry with intentional outreach to the lost and marginalized in our society.

It is in those marginal places, Beck recounts, that his faith was restored and refreshed as he (re)encountered language and practices around the devil and spiritual warfare. In his Introduction, Beck shares a memory of a prison prayer that included “Lord, protect us from Old Scratch…” (p. xiii). Beck recalls that prayer as the beginning of his journey to take seriously the devil as a biblical and theological concept but most importantly as a reality to be resisted.

Beck makes arguments from the biblical witness including a reminder that Satan “names that which is working against God and God’s kingdom in the world” (p. 8) and that our struggle is against spiritual forces of evil (Ephesians 6:12). He touches on various atonement theories and their relationship and witness to the power of evil overcome by Jesus. This is, finally, Beck’s theological argument: Jesus overcame something. As Lutherans we often say you can’t have Easter without Good Friday. You can’t have good news without bad news:

Does the Devil exist? As in literally?
I don’t know. Maybe. I wouldn’t rule it out. But I do know this:
Something killed Jesus. Something real. And the Bible named it:
Satan. The Devil. Old Scratch. The adversary to the kingdom of God.
And the Bible warns us that Satan is still out there, still prowling the world, like a lion, looking for someone to devour. (p. 11).

After making a biblical and theological case for the existence of the devil (or at least for “modern” Christians to consider it), Beck moves into the concept of spiritual warfare. The problem, as he sees it for disenchanted Christians (that is, Christians who engage with their faith and with the world through primarily rationalistic, scientific, and dis-enchanted means) is a “Scooby-Dooification” of evil. That is, we read biblical stories and our own lives like an episode of Scooby Doo. We seek to unmask the demonic to prove that it is really just a human in disguise (p. 19). We do this when we say that the problem is not the devil but economic greed or Republicans or Democrats or secularization in society.

The problem that this “Scooby-Dooification” presents us in our struggles is twofold. First, we become discouraged as we suffer from compassion fatigue. We can become like Oskar Schindler who was exhausted by his lament that he couldn’t save one more person (p. 155). The other problem is that we turn people into our enemies. We ignore Paul’s reminder in Ephesians 6:12. We think Adolf Eichmann is our enemy and then we find him completely banal (pp. 103-105). Eichmann is not our enemy. Nazism is our enemy. Omar Mateen is not our enemy. Violence and homophobia and racism are our enemies.

Instead, Beck calls us to a spiritual warfare of resistance. The Bible, he says, does not debate whether evil and the devil exist. The Bible takes them as givens and calls us into a posture of resistance (p. 174). Doubting and disenchanted Christians (or curious seekers) often run into problems with the question of evil – why does evil exist? What is the nature of evil and suffering? Beck says that our “response to suffering isn’t intellectual but behavioral” (p.175). We can debate the existence of the devil and our monotheism and our theological categories of suffering and evil or we can pick up a towel and wash our neighbor’s feet. Beck believes that a revived language for the devil (Old Scratch) and spiritual warfare will keep us from demonizing individuals as we stay focused on the freedom that has been won for us in Christ (freedom from what?) and our call to engage in that spiritual warfare to participate in God’s work of building the kingdom. 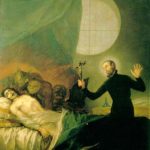