You are here: Home / A Discussion of Liturgical Norms / Are There Norms for Lutheran Worship?

Not long ago, after a visit to the Wartburg Castle, I worshiped at the church of St. George in Eisenach.  Though I don’t speak German, worship in that place on that day was more than familiar to me.  There was a rooted ness about it.  Perhaps grounded in the baptism of a child at the font where Bach had been baptized.  Undoubtedly reinforced by the gathering around a table in the shadow of an altarpiece that Martin Luther surely gazed upon when he was young.

I was drawn into what was happening there in that place – what had been happening there for hundreds of years.  It must have been the shape of things that contributed to my sense of belonging.  Call it the classic Western liturgy.  Call it the ordo.  Call it the ‘deep structures’ that run through so much of the history of Christian worship.  Whatever you call it, it was enough to make it clear to this visitor from afar that I was at home among believers gathered around the means of grace.

The conversation about liturgical norms for Lutherans began long before the beginning of the Evangelical Lutheran Church in America.  These days there is a noteworthy intensity to the multi-layered debate.  Can norms really exist?  If there are worship norms for Lutherans, what are they?  And who decides?

It is that last question that is easiest to answer.  At least from my vantage point, it seems clear that the church decides.  And by ‘church’ I don’t mean worship staff in the churchwide organization or teaching theologians with expertise in liturgical matters.  I mean the whole church, including and especially pastors, other worship leaders and people who gather week after week in their local assemblies.

It is happening already – the deciding.  In ways that are sometimes intentional, sometimes spontaneous, in the midst of a sometimes-intense debate, the church is about the business of deciding what makes worship ‘Lutheran.’  It isn’t always pretty and it is still not clear where we might end up with regard to agreeing on norms for Lutheran worship.

To be clear, I think there are norms to be identified and named if by ‘norms’ we mean descriptors of what happens in most places most of the time. Again, from my vantage point, the descriptive approach is preferable to establishing prescriptions for worship behavior.  It is especially preferred at this moment, as new worship resources are beginning to take shape.  There is wisdom in identifying certain things held in common.  If those ‘things’ are not yet reflected in what happens in most places most of the time, then let the identification be a starting place.  A clearly articulated goal of where we are headed together.  A constellation of certain things that, when evident in the life of a Christian assembly, all who gather can find themselves wonderfully, perhaps even strangely, ‘at home.’

The Use of the Means of Grace, the ELCA’s statement on sacramental practices points constructively to what I mean.  The statement “seeks to encourage unity among us in the administration of the means of grace and to foster common understanding and practice.  It does not seek to impose uniformity among us.” (UMG, principle 4)  In other words, The Use of the Means of Grace lays out a vision – a descriptive rather than prescriptive vision of a starting place for Christian assemblies.  This vision is normative in its potential and in the sense that while we would not impose this vision upon local assemblies, there is widespread agreement that as the church we are at our best when certain things happen in most places most of the time.

So with an eye toward The Use of the Means of Grace, what constitutes the vision?  What are the certain things that provide our starting point? Included are the following convictions:

-Sunday is the primary day when Christians gather to worship.

-The assembly’s worship is enhanced when lay assisting ministers serve in various roles (41).

-Holy Communion is the coming together of Word and meal (34) celebrated every Sunday and festival (35) in a manner that reflects “the unity of the Body of Christ and the dignity and new life of the baptized.” (45).

-Believers gathered around Word and sacrament are led into mission by these very means of grace (51, 54A).

A disclaimer, of sorts – I would argue that there is widespread agreement regarding the vision articulated in The Use of the Means of Grace.  But in some corners of the Evangelical Lutheran Church in America local worship practice does not reflect an awareness of or support for such a vision.  If normative means ‘what happens in most places most of the time,’ we are not quite there.  So the vision is still only normative in its potential, providing the ground for continued conversation.  A starting place for those who are only now entering the debate.

The conversation does continue.  Sometimes it is intense.  Still, I think there is reason to be hopeful.  There are signs that the debate is shifting away from battles over style, making way for conversations about more central things.  There is interest all across the church in the ‘quality’ of worship.  People want worship to embody what we claim to believe.  This churchwide interest may add to the intensity but it need not distract us from deciding together that there really are some things we hold in common, some practices that we ought to share.  There are some central things that can and should come to expression in most places most of the time.

The conversation and the effort to live into some normative possibilities are helped by a recently published volume that every ELCA congregation should have recently received in the mail.  Principles for Worship is a provisional resource, a study document that has grown out of the early stages of the Renewing Worship project – the churchwide effort to develop the next generation of worship resources.  Reflecting the collaborative work of more than one hundred voices from across the church, Principles for Worship builds on the foundation provided by The Use of the Means of Grace in an effort to describe Lutheran worship at its best.

The collaborative voices were many and varied.  Still, bringing many different perspectives together was not meant to put an end to the conversation. Principles for Worship, like the entire Renewing Worship project, invites others to join the discussion.  Or more precisely, to enter into a collaborative effort to describe who we understand ourselves to be as Lutherans at worship.  To identify and enact the norms for the Christian assembly.  In other words, to help certain things – central things – happen in most places most of the time.

I travel a lot more now than when I was serving a congregation.  Not long ago I was away from home.  A visitor in a different assembly.  The music was different from what I am used to.  Different instrumentation.  There was a different orientation to the room.  Many different ways of doing things.

Still there was a rooted ness about it.  Perhaps grounded in the preaching that laid open the gospel.  Undoubtedly reinforced by the loaf and cup so generously shared.  Call it contemporary.  Call it an alternative reflection of the ordo.  Call it the ‘deep structures’ of Christian worship still running through.  Whatever you call it, it was clear that the church is still deciding and that though I was a visitor from afar, I was still ‘at home.’ 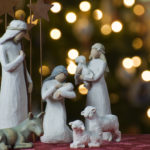