You are here: Home / Faithful Parenting / On the Way: Children of the Heavenly Father

The phantom-limb sensation of parenting two children lasted for about a month. For over two years, my wife, son and I had been the family for a foster child placed in our care well before her first birthday. Caring for her was a great blessing and an adventure, though it was, not coincidentally, a daily challenge. In late June, Sophia (as I’ll call her here) was returned to her mother, and by the end of July I had stopped habitually referring to my children and asking my wife pick her up from pre-school. It is a curious kind of grief, because the child is alive and well, but she is absent–quite fully absent, as it happened. It taxed the budding theology of our four-year-old biological son Soren (as he is actually named). “I used to have a sister but now I don’t have a sister.” “I want Sophia to come back and be part of our family again.” “We prayed for Sophia but it didn’t work.”

Being clergy, my wife and I sought to explain our role as foster parents, both to ourselves and others, in theological terms. I wrote about fictive kinship for a news daily and about the consequences of budget cuts for foster families driven by “altruistic motives&#8221; for a national political journal. My wife wrote about how her congregation adapted to and embraced our new and very sudden arrival.

The experience gave me fresh insight on what we say and leave unsaid when we speak theologically about children and family.

It is a commonplace in modern preaching to deprecate the culture and religion of Jesus’s world for the low status in which it held children. One of the first ancient texts I encountered at Divinity School was the infamous letter from a soldier to his wife, telling her to keep their expected child if he was a boy, but to throw a girl onto the kaprio.

While we’re right to stand agape at the difference between our view of childhood and that of the ancients, we often congratulate ourselves rather more than we should in doing so. Inasmuch as the Lutheran church is socially rooted in what remains of middle-class privilege we are liable to miss the ways in which children are still treated as quite dispensable by our enlightened modern society. Sophia was a prime candidate for abortion, being conceived out of wedlock to a mother who could easily be described as “unprepared” in the rhetoric of bourgeois feminism. No charges were ever filed in the violent assault that brought Sophia into foster care. Since she qualified for Medicaid automatically, her health care was covered. But it proved at times to be a battle to get her the care she needed, as providers are reluctant to work for Medicaid’s stingy reimbursements and as the state’s own doctors, undoubtedly feeling a budgetary squeeze, were unwilling to authorize a needed procedure (we kept up the pressure and they relented). When Sophia was returned to her mother’s home, it happened with no transition period and no regard for her developmental need for continuity, repeating the shock and trauma that accompanied her initial placement in our home.

Half of Medicaid’s recipients are children, and the SNAP and WIC food stamp programs overwhelmingly serve families with children.

From WIC coupons (about $40 each month) to asthma medications to periodic caseworker visits to check on her care, Sophia’s life was continually touched by government programs. And they are precisely the kinds of programs that have been under budgetary attack, at the state and federal level, since the economic meltdown of 2008-09 and especially the Republican wave of 2010. As I write this, the nation’s pundit class has been hailing the courage and seriousness of a vice-presidential candidate whose primary claim to fame is a budget proposal that cuts $800 billion in Medicaid and another $130 billion in nutrition programs over ten years. Half of Medicaid’s recipients are children, and the SNAP and WIC food stamp programs overwhelmingly serve families with children. His stated rationale for this dramatic budgetary shift is the danger that there will be too many “takers” like Sophia living at the expense of high-income “makers.” That such sentiments are even breathed in a society supposedly shaped by the ethics of the Bible ought to shock and horrify us.

Foster parenting taught my whole family a new definition of love. I have often thought of the Christian virtue of agape as an extension of love from what you may call the “natural” or familial affections into our relations with the neighbor and the stranger. “Not less of love,” as T.S. Eliot put it, “but expanding / of love beyond desire.” Foster parenting reversed this spatial image of agape for me. We embraced Sophia out of what you may call an abstract sense of vocation or duty, and we had to hold on to that abstract commitment through a long drought of the sentiments we associate with parental love. We were, after all, in a position of total privilege with regard to this child. It would have been discouraged, but not illegal, for us to drop her off at the DCFS office with no notice whatsoever, and there were many times when we had to pray and wait out the temptation to call our caseworker and give our two weeks’ notice to send her along to a new home, where a reputation as being “difficult” or “hard to place” would precede her.

And difficult she most certainly was. She was gravely injured at first, which no doubt complicated her ability to sleep and amplified her blood-curdling screams (she did not learn to cry for her needs until she’d been in our care for some time). I found it very difficult to mimic the habits of parenting that were so closely fused with our oxytocin-fueled connection to our biological son when all I could feel was exhaustion or despair. But very quickly one comes to understand that the failing is all one’s own; there is no blaming a one-year-old for behaviors that vex you beyond patience, there is only the need to pray and practice for more patience.

Steadfast love…is much more about the steadfastness than the love, at least when speaking from our modern emotional lexicon. The gift of love is added, so to say, to perseverance.

And as time went on, the emotions filled in the space that was marked out, however imperfectly, by our attempt to act as if we loved this girl. The deep-dark humor of our sleepless early weeks and months with Sophia gave way to affection that was as fierce and powerful as if she’d been our own. Steadfast love, I came to see — switching to an Old Testament concept — is much more about the steadfastness than the love, at least when speaking from our modern emotional lexicon. The gift of love is added, so to say, to perseverance. It was a grace for which I will forever be grateful.

3) The child shall play on the hole of the asp.

Needless to say, our son did not find it nearly so challenging to grow in love for his new, fictive sister. He loved her almost from the start, unreservedly, and without the least hormonal confusion over birth status. I fortified myself throughout the process with Jesus’ words in the Sermon on the Mount–that the physically and spiritually poor are blessed, that the cheek is turned and the coat is gifted and the sparrow is fed and the lily is arrayed gloriously all in that eternal now of Jesus’ God-struck ethics. This would not work for our son.

Children are by nature prophetic, I came to understand. Or if you prefer, prophets are overgrown children. They do not accept separation, injustice, or death. And it is the most peculiar sorrow of parenthood that we feel somehow obligated to teach our children to accept these things, perhaps not realizing that we could succeed too well and that the defiant sense of fairness and pure attachment to another could be covered up and forgotten rather than harnessed and modulated. Jesus, it seems to me now, is talking about an aspect of ethical life that touches something eternal; hence all the loving of enemies and the seeing in secret and the treasure in heaven. This is not quite in keeping with the prophetic tradition, which looks not to an aspect of ethical life but with the whole thing, with the wolves and lambs, the swords and ploughshares, the children unhurt over the hole of the asp.

So in a strange and unexpected way, I have found myself tutored in faith by our son as we have managed the dramatic changes in our family. “Prophecy is only brilliant memory,” Marilynne Robinson writes in the stunning peroration of Housekeeping. “There will be a garden where all of us as one child will sleep in our mother Eve, hooped in her ribs and staved by her spine.” As adults we are embarrassed by both our grief and our love, wary of exposing them to mockery, indifference, or mere disappointment. Our son is not so. He loves the girl who was his sister, insisting all along that she is his sister still, and always will be. That innocence and that love are God’s great gift to the world, remember it however we may.

What theological lessons have you learned from the children in your life? 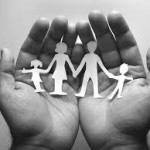