You are here: Home / Growing Leaders / Next Level Leadership and Our Move to Multisite

My wife, Carol, and I are both second-career pastors. When we started out in pastoral ministry in our early 40s, we found ourselves leaning heavily towards a model of Pastor as Leader. Like many others who were entering ministry at the turn of the millennium, we found ourselves looking at first-call opportunities in churches that had experienced conflict, discouragement, and/or long-term decline in numbers and vitality. We saw a crying need for healthy, effective leadership.  We found people were tired of the false option:  be controlled or be enabled. They wanted something less than control and something more than non-directive feedback. They were hungry for leadership that both inspired and collaborated. In 2000, when we came to Redeemer, Park Ridge, we aspired to adopt a loving, servant attitude in all we did.  However, we didn’t shy away from the task of being purpose-driven, vision-casting, strategic-planning, and cheer-leading leaders. And, for seven years, this energetic model of leadership served both of us and the congregation well. People responded positively. God blessed our congregational life together. Our congregation experienced a turnaround, a comeback, a transformation – call it what you will. We nearly tripled in size and experienced a wonderful sense of congregational vitality.

But seven years in, our operative leadership model for ministry seriously was tested by two key developments. First, Carol left Redeemer to join the synodical staff and focus on congregational renewal. Second, I took a three-month sabbatical leave in 2008. In my absence, a significant number of new people became engaged in leadership in new ways. Thanks to the ripple effect of Carol’s absence and my sabbatical, the congregation clearly outgrew the effectiveness of my nearly nine-year-old model of leadership. Something had to give. I knew then that I needed to upgrade and expand my leadership abilities and found myself gravitating toward coaching. I instinctively knew I needed, was ready for, and could find coaching resources. I needed to shift my understanding and practice of ministry from Pastor as Leader to Pastor as Leader-Coach.

Years of consistent visionary, strategic, and purpose-driven leadership had helped our congregation turn around. Adding coaching to our leadership toolkit allowed us to 1) give additional practical help to the leaders we already had; and 2) prepared us for what God had in store for us next – becoming a multisite congregation.

The Shift to Multisite

In 2011, when we felt God calling us to launch a second location of Redeemer on North Avenue in Chicago, we knew that the leadership model that had served us well for eleven years would need to change – significantly. In our shift to becoming a reproducing congregation, we were embarking on something that was truly transformative at every level of the congregation, leadership included. I knew that I needed to retool and expand my leadership abilities at a personal level.  I jumped at the chance to participate in the first group of Intentional Impact’s “Next Level Leadership” process. The timing couldn’t have been better. It allowed me the focused time I needed to invest in my own development, to be on the receiving end of timely and helpful coaching (a real blessing), to expose and address some gaps in my leadership style, and to learn to effectively “manage” others in addition to leading them.

But, more broadly speaking, we also knew that we needed to deepen and improve our leadership development process at the congregational level. Over the years, we had attracted and retained some wonderful leaders, but hadn’t really recruited and developed them in any intentional, consistent, and thorough way. So, as part of our move to multisite, we agreed to have Intentional Impact come and conduct a “Leadership Audit” at Redeemer. The audit revealed a lot of what we had already intuited: that we were already strong in many areas but needed to improve in several others. They made recommendations in two key areas – leadership development and implementation – where we already knew we needed some help if we were going to do healthy, vibrant, growing ministry in two locations.

Since we knew, if we were going to grow into a thriving multisite church, it was a crucial, high priority to create an ever-expanding stream of faithful and effective leaders, we had to get busy building a “leadership pipeline.” But how? Intentional Impact helped us identify some good, pragmatic building blocks for doing this. In brief, they are:

Defining and Counting Leaders: It’s fascinating to think that, for more than a decade, we had never actually defined for ourselves (or the congregation) what we meant by “leader” and never had counted them. The simple process of pausing to craft a definition of what it meant to be a leader at Redeemver (and then hashing out who we thought truly functioned as a leader) was immensely clarifying.  It gave us a helpful starting point. Metrics matter – or as Bruce Hanson from Intentional Impact helpfully kept reminding us, “You get what you measure.” So, we started measuring leaders!

A Five-Step Apprenticing Process: The apprenticing process as a key path to leadership has been understood easily and enthusiastically embraced by the congregation. It gives our existing leaders a way to identify and start working with prospective leaders on their own.

Leadership Gatherings: Starting in October 2012, we began inviting all of our leaders (actual and prospective), apprentices, and coaches to Leadership Gatherings. About every six weeks or so, we gather for 90 minutes on a Saturday morning for three purposes:  1) continue to cast our shared vision; 2) work on leadership skill development; and 3) form small group leader “huddles” where they can talk through what they’re learning. By doing this on a regular basis, we’re also developing a much broader leadership esprit-de-corps, forging connections between leaders from both locations, and giving new leaders a venue where they can come together and begin to think like a leader.

Coaching Development: Since all leaders get stuck, need help, and deserve encouragement, we broadened our pool of coaches (both staff and lay) by doing in-house training. So far we’ve used “coaching triads” to train eight people to use the “GROW” (Goal, current Reality, Options/Obstacles, Will/Way forward) method of coaching, in order to ensure that every leader has ready access to a personal coaching relationship. This is extremely important, so that pastoral staff don’t have to take on the total coaching burden for an expanding pool of leaders and apprentices.

Effective and Frequent Communication about Leadership: Nothing else we do to develop a leadership pipeline will be very effective if people in the congregation don’t understand, aren’t inspired, or can’t find a practical opportunity to get involved. That’s why we developed an infographic to paint a clear picture of how the leadership development pipeline works at Redeemer. The joy of seeing emerging leaders and apprentices is something we talk about from the pulpit, write about in our newsletter, celebrate at our gatherings, and personally invite people to take seriously for themselves. 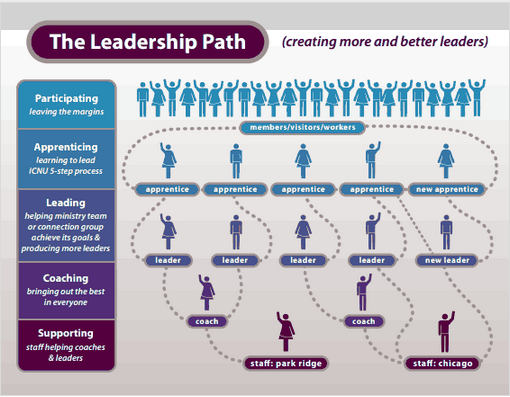 2. Being Thorough in our Implementation

Like most families, organizations, companies, and congregations, Redeemer has struggled through the years with effectively implementing our vision and strategy. Lots of wonderful things did happen, but we often lacked thoroughness in our follow-through. We had great strategies and inspiring goals, and we gave people huge latitude and permission to risk and innovate – all great things. And yet, despite all that, we still found it hard to consistently carry them out in the face of the day-to-day ministry whirlwind that occurs. When everything is important, and when everything is multiplied and going on at two locations, finding a way to focus on a seasonal “wildly important goal” became essential.

Saying that “we need focus” is obvious. Finding a workable process that actually helps us set our priorities – and achieve them in a disciplined way – is anything but. As it happens, in one of my coaching conversations with Intentional Impact, Brian Zehr suggested that I look into a process called “The Four Disciplines of Execution.” It turned out to be just the right thing at just the right time. We’re now about six months into implementing this approach at Redeemer, and it’s begun to pay huge dividends. As a staff, we’re more focused, intentional, and regularly accountable to each other (and the congregation) about what we’ve all agreed are our top priorities for this year.

Having a regular (for us, monthly) cadence of accountability, and a built-in time to explore options and find encouragement, support, and consultation with Intentional Impact allowed us to avoid a lot of major missteps on the path to forming a multisite ministry. Especially at the beginning, we knew we were in over our heads.  Being able to partner with people who’d already been down that same road was highly reassuring and practically helpful. Our tremendously gifted and motivated mission developer for our Chicago site, Matt Stuhlmuller, was given coaching from the very beginning. At the time, we likened his coaching to scripting the first ten plays for a rookie quarterback. Matt was given permission to focus on who he should be making contacts with, what tasks he should be filling his days with, where he should be directing his energy, and when he should be pushing hard or giving himself permission to pause. And perhaps most important, his coach kept reminding him why he was doing what he was doing: to invite people into a life-changing relationship with Jesus and his community of followers. By having the first several plays scripted, Matt was able to get the ball rolling much faster than a mission developer with a full playbook. He was able to focus and keep his spirits up through a challenging and draining process. And he was able to do it with a competent and committed team of other people. It made all the difference.

Though Matt’s role has been crucial, it wasn’t only for/by Matt, and it wasn’t only in the very earliest stages that timely coaching has helped our move to multisite. It’s benefited our entire leadership team to have an outside perspective and voice during these past two years. It helps us clarify our seasonal goals and explore our range of options. For example: Should we (a) set a specific date to launch weekly public worship services or (b) launch when our core team reaches a certain size? Should we (a) follow the same preaching series in both locations so we’re all on the same rhythm, (b) let each campus do its own thing, or (c) go with a blend? What practices should remain constant, and what’s up for negotiation? What’s essential to our overall congregational DNA, and what’s accidental?

These are the kinds of questions that begin to push us back to the heart of who we are as a congregation. The experience of becoming a multisite congregation has not just stretched and grown (and blessed) us as a community. In a very real way, the act of going multisite has reshaped both our self-understanding and our ongoing behavior as a reproducing congregation. Hard work? Absolutely. But we wouldn’t trade it for anything.

Fred Nelson is the lead pastor and co-campus pastor for Redeemer Lutheran Church, Park Ridge & Chicago, Illinois. He is a member of the Metropolitan Chicago Synod’s first Intentional Impact group.