You are here: Home / Honoring the Body / As I See It: Bodies Dishonored and Honor Restored

I find an interesting irony in how for all the attention we give to our bodies and for all the bodies on display in our culture, as individuals we may be more secretive and insecure about our bodies than ever before. I am bemused to watch fit young men go into contortions to get dressed in the YMCA locker room without removing their shower towel, while seniors like myself, whose bodies perhaps ought to be covered, walk around butt naked. But we come from an era in which boys were used to being bodily exposed to one another.

Gym class in the 1950s, at least in P.S. 61 in Buffalo, NY, usually meant gymnastics. We did group exercises, tumbling, jumping over the pommel horse, climbing poles, supporting ourselves on the rings, etc. The typical gym outfit for boys was gym shoes and very short shorts provided by the school. A clean white t-shirt from home was optional. Warm up for gym class usually consisted of running in the gymnasium or outdoors if weather permitted. If time remained in the gym period we got to play dodge ball or basketball — skins vs. shirts. If we were really sweaty the gym teacher allowed time for everyone to hit the showers. Buffalo public schools even provided “shower periods” for those who signed up for them as a way of promoting hygiene because most families in the 1950s didn’t have home showers. We didn’t. In our family we usually bathed on Saturday nights and as needed. But in the public schools in the 1950s there was a great concern for public hygiene that took on a moralistic tone. “Cleanliness is next to godliness,” we were told. I’m told that today showers after gym class are optional and many kids go back to their classes sweaty rather than having to get undressed in front of others.

In the public schools in the 1950s there was a great concern for public hygiene that took on a moralistic tone. “Cleanliness is next to godliness,” we were told.

Boys swam nude at the YMCA and in high school swimming classes in those days. Nude swimming and showering together made us less self-conscious about our bodies at an age when adolescents obsess over the perceived inadequacies of their bodies. Young teens tease one another about each other’s bodies and this can have a negative affect on self-esteem. But at least among the boys I grew up with, I don’t recall a lot of that. Being small, skinny, and wearing glasses, I would have been on the receiving end of a lot of teasing comments. Certainly there was some teasing, but on the whole I recollect that we who were used to being together thus exposed didn’t think much about it. The fact that some boys attained puberty earlier or later than others was not a big issue when we could see that physical development was not the same for everyone. It was not something I obsessed over, other than when I ceased being a boy soprano during the eighth grade and lost my place in the Singing Boys of Buffalo.

But we are aware that youthful bodies have been dishonored. In recent years we have been inundated with reports of sexual abuse. We’ve learned that boys and girls on the cusp of their sexual awakening have been sexually molested by Catholic priests, athletic coaches, Boy Scout leaders, teachers, relatives, and in my case by my parents’ tenant when I was fourteen.

My parents had rented the upstairs flat to a young couple who had a baby. One night they asked me to stay with the baby while they went out. I fell asleep on their sofa in my pajamas while waiting for them to return. I was in a deep sleep and not even aware that they had returned when I suddenly felt something warm rubbing my penis. I remember groggily waking up and wondering what was happening. Seeing that I was waking up the man leaned over me and asked me in a quiet voice if that felt good. “Don’t you like to do this to yourself?” he asked. I was instantly aware that something was wrong. His wife called to him from their bedroom and asked, “What’s keeping you so long. It’s late. Come to bed.” He told her that he was just checking on me, and then went to his wife. As soon as he went to his bedroom I got up and went up to the attic bedroom I shared with my younger brother and climbed into bed with him. I don’t know why I did that. Perhaps for protection. But the guy actually followed me up to my bedroom to check on me. I heard the door open and knew he was looking in. So in addition to fondling me he saw me in bed with my brother.

I was terrified by what had happened but didn’t tell anyone about it. The guy was creepy. He would creep up to my bedroom when I came home from school and walk into my unlocked room without knocking. (We didn’t lock the door as a safety precaution.) One warm spring day after school I was sitting on my bed wearing only my jockey briefs when he crept up the attic stairs, opened the bedroom door, and just stood there like he belonged in my room, asking questions like “Do you always sit in your underwear in your room?” I was so relieved when that family finally moved out!

Most boys didn’t tell their parents about what had been done to them and we also know now that authorities tended to dismiss accusations. That’s why reports of sexual abuse have come to light only long after they occurred.

I suspect that this was far more common than has been reported. Some abusers were able to go through members of a whole family, team, scout troop, etc. Most boys didn’t tell their parents about what had been done to them and we also know now that authorities tended to dismiss accusations. That’s why reports of sexual abuse have come to light only long after they occurred. We were too ashamed or scared to say anything. Some adolescents indicate that something is wrong by their surly attitudes or social withdrawal, but these clues are seldom picked up by parents or other adults. I kept my experience to myself. I became more reclusive in the house, staying in my attic room to do my homework, listen to classical music, or draw pictures of sailing ships and church buildings.

I need to put this incident the context of everything else that was going on in my life at that time. Since it took place the same year I was in freshman high school swimming class, wrestling with my friend Gary during free time or playing water polo in the nude, I don’t think this incident of sexual molestation made me ashamed of my body. But it taught me that my body is mine to share and not someone else’s to take.

We need to collect stories of abuse and analyze them in an interdisciplinary way to assess their historical-cultural context, social meaning, and psychological impact. Preventive measures suggest that adults should not be alone with children or youth, not that adults and youth should be separated. I have experienced the Korean spa culture in which men and boys and women and girls, in separate sections, are together nude, and it seems quite wholesome.

I must admit that as a teen I was shy about sharing my body with others. My family showed little physical affection toward one another in terms of hugging and kissing. This was probably not unusual among families at the time. But the few dates I had in high school were not noteworthy for any kind of physical touch such as even holding hands or kissing at the end of the evening.

We relate to God through our bodies. We stand, sit, walk, kneel, bow, and sometimes fall on our faces before the Holy.

In later life I discovered the work of the phenomenologist Maurice Merleau-Ponti, who taught that we relate to others and to the world itself through our bodies, especially through our senses, not just through our minds.1 I learned through experience that we also relate to God through our bodies. We stand, sit, walk, kneel, bow, and sometimes fall on our faces before the Holy. Christians believe that God has also related to us through a body — the body of Christ. All the fullness of God inhabited the body of the historical Jesus and we receive the body of that Christ in the holy sacrament. We apprehend Christ’s bodily presence through our senses. The sacramental elements are smelled, touched, tasted. We hear the words that accompany the reception of the sacrament and kneel at the communion rail to reverently receive that body. I came to believe that by honoring God’s body and receiving Christ’s body and blood into my own body any dishonor in my body is washed away and the honor of my body is restored. 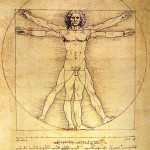