You are here: Home / Human Sexuality in the ELCA: Locating the Struggle / Reflections on the LSTC Leadership Conference: A More Excellent Way

Early in 2002 the Lutheran School of Theology at Chicago sponsored Leadership Conference 2002 A More Excellent Way: Addressing Sexuality in the Church. Its intent was articulated:

The wider church has called us to study sexuality. Events in the world have made us vividly aware that embodied life is to be treasured. Thus, it is especially important to discern what the Spirit has to reveal in our time concerning this marvelous and complicated wellspring for identity and relationship.

We bear the image of a God who takes delight in the creation and wills us joy. We proclaim resurrection of the body and the word of God becoming flesh to save us. We call sexuality God’s good gift, but we’re not always sure what follows. How do we differentiate desire from lust, a healthy sense of self from selfishness, pleasure from mere use of others? How do we converse meaningfully about virtue and sin?

Is there a way that the many members baptized into the one body can lovingly acknowledge that they need one another, and together learn something new? We may find a holy place of tenderness and strength, delicacy and fire, wonder and joy.

The conference attempted, and to a large extent succeeded, to broaden the study and discernment of sexuality beyond the singular issue of the nature and practice of homosexuality. Beginning the conference in the “cradle” of theology seemed most appropriate to guard the discussion against the politicization or socialization of sexuality. Conversation absent theology can be, and is, conducted in any academy or forum – scholasticism redux. But theology is a peculiar voice of the church. Should the church forsake its theological vocabulary and constrain its speech and action accordingly, then it should have the expectation that its voice will at best be lost in the cacophony of other voices, and at worst, ignored. My notes, therefore, reflect the theological conversation of the conference.

Sexuality is more than personal, to be structured by rules of intimacy, but public so as to conform to rules of social justice, which goes beyond sexual intercourse, Christina Traina[1] suggested. The public nature of sexuality, and its incipient goodness, is clearly identified in the Incarnation. Elaine Ramshaw[2] pursued the theme of the Incarnation by reporting that 81% of Lutherans in a recent survey indicated that Jesus felt no sexuality (which seems to suggest a mild reoccurrence of Docetism.) Theology must aim at the meaning of sexuality – almost a theology of pleasure – according to Ramshaw.  It is meaning, not physiology, that informs and forms the Christian.  Lee Butler’s[3] response extended Ramshaw’s comments of investing in meaning for power to move sexual fantasy to imagination therefore lending it to creativity within the scope of God’s on-going creative activity. Making sexuality creative helps us to know who we are, what we are to become and what it means to be in relationship.

Both Robert Brawley[4] and Esther Menn[5] allowed that as much as we might want to find the comfort of clear answers to our questions in scripture we are on a disappointing journey if that is our quest. What we can learn from both testaments is that sexuality is not just an individual matter but is a concern for the entire community. Christian identity limits sexuality but also sanctifies it. Limits may be culturally specific but they address universal issues that every community confronts. These issues are contingent upon a sense of mutuality and respect within communal relationships. Therefore, the forming question is: Does the community make a difference in how we live out our sexuality?

The bible is not a science book but a narrative of a relationship between God and God’s people. Consequently, the specific “why” question of homosexuality goes unanswered. Science has begun to reveal aspects of sexuality, but the questions that remain far outweigh the answers.  Khytam Dawood[6] identified that 3 to 4 percent of males and 1 to 2 percent of females self identify as homosexual. But even here science has not revealed any absolutes. Neither nature (genetics) nor nurture (environment) reveals a cause and effect relationship. In fact, like everything else, genetics and environment are also related.

Butler continued to stress the community nature of sexuality. “Can we imagine a harmonious union without domination?” he asks. He admits that we cannot unless we hurdle years of tradition that have guided humanity to separate the spiritual from the sexual. Unless we reunite the two in a new understanding, we will fail to gain a foundation necessary to build stronger relationships. The continued separation of the spiritual from the sexual will contribute to a divided loyalty of the individual as one is lifted up to the denial of the other. It is no wonder then that the separation leads to an either/or human response of “prey” or “pray”.  Healing, therefore, results in the restoration of the spirit and the body leading to harmonious relationships. Ramshaw added that the body is communally, socially, shaped which provides its own challenges. She linked the creation and incarnation, lifted up by Traina, to the resurrection of the body emphasized by Butler indicating that in the divine Logos there is no intention to separate the spiritual from the sexual. He attempted to move the conversation from fantasy to imagination. Butler argued for the church to afford itself the opportunity to learn from the black experience of unifying both spirit and sexuality so as to understand more clearly what it means to be in relationship. In this regard, Ramshaw’s comments that the body is socially shaped presented the church with some serious challenges in its mission of Christian formation that disputes society’s dominant message of spiritual/sexual separation.

But, the ELCA is shaped by a particular confession and a doctrinal tradition that makes its struggle with sexuality in the church different from other Christians and certainly different from contemporary society – perhaps not “a more excellent way” but certainly a different way! The Lutheran voice is peculiar in its advocacy of the paradoxes of faith and life. We acknowledge the “messiness” of living in the “already, and not yet”, at the nexus of the “two kingdoms”, in the overlap of “both saint and sinner”, the dialectic of Law and Gospel, between memory and promise, and “lord of all, servant of all.” Lutherans know how to struggle and they know how to use scripture, doctrine and confession to structure such struggle. My notes remind me that the tensions of these paradoxes were not emphasized and as a consequence the conference lost some of its Lutheran diversity within the unity of the Christian Church. I would have appreciated a more robust discussion concerning the tradition of both scriptural and doctrinal hermeneutics as they confronted the issue of sexuality.

Clearly addressing the humanity of the homosexual issue differently from the past opens critical questions. What is different today that makes tradition an inadequate guide for the future? Has the Church misread scripture? Is our society in some important ways superior to predecessor societies? Are we being both exegetically as well as hermeneutically honest by denying certain scriptural proscriptions while accepting others? Irrespective of scientific revelations of either genetic or environmental causes of homosexuality, does science trump scripture and tradition, or does it call for new dogma? If so, on what basis? How do our confessions inform our questions and structure the conversation of orthopraxy and orthodoxy? These questions obviously are not new. Some folks have been thinking about them for years. (One only has to participate in LSTC professor Audrey West’s lecture on Acts 10 to gain instructive insight into the debates of the first Christians that rivaled the intensity of our own modern sexuality discussion.) For our time even if not specific for the ELCA, the issue was rightly framed by the conference leaders.  It is not an issue of homosexuality, or even sexuality, but of human wholeness within the embrace of a loving God.

Where do we go from here? The sexuality discussion is focused on decision. The sexuality decision is structured as a vote. Yes or no. Struggle seems to have an end-time. Will that time mean, borrowing from Bernard Baruch’s thought, that the other fellow’s light must be blown out for ours to shine? Unfortunately, the light that may be extinguished may be that of our true identity, so caution justifiably characterizes the ELCA’s deliberations. We confess that in the tension of the paradoxes of Lutheranism lives our ethics and our formation as community. Ethics in the tension become dynamic potential for living rather than static regimen of parliamentary debate and procedure. But ethics is the mark of identity not its cause. Identity is formed in the memory of the mighty acts of God throughout the history of the children of Abraham – and apparent in our individual histories as well. Identity is confirmed in our purpose celebrated in our baptism. Where tradition and purpose kiss there we find our ethics. Whatever we decide as a church – in the messiness of our Lutheranism – if it denies either our tradition or our purpose it will deny our identity and our peculiar ethic will be vapid. As a consequence, the gift of the diversity of our voice will be weakened or even lost to the unity and vitality of the church.

How, in fact, does decision and discussion peacefully co-exist? I for one do not look forward to a vote or to a regulated end of discussion. It seems to me that our public ministry resides in discussion. The world should see how we talk – how we struggle – together. Maybe we can begin to see “through a glass dimly” as we are schooled in the meaning and model of divine peace. Disagreement need not always require decision. When even a modicum of consensus seems to escape us perhaps we are being encouraged to simply live the question. Sometimes, sitting on the fence can be the best, if not the most comfortable, seat we can take in order to reflect our confessional identity. 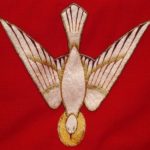