When we were students at Northwestern University in the early 1950’s, Meta (now my wife) and I first met Joe Sittler. Our Lutheran campus pastor at Northwestern, Clyde McCormack, used to invite Joe up to Northwestern to speak to our student group. We were fascinated by Joe. It was from him that I learned that it is really OK to think and be a Christian at the same time. The breadth of his interests, his fascination with science, his sense of humor and his humanity, all resonated with us.

Over the years, we stayed in touch with him, invited him to Missouri to visit my University and our congregation, and we used to meet him in Chicago, often at Jimmy’s (a bar near the University of Chicago) for Polish sausage and beer and theological discussions. Joe inspired and taught us, and broadened our horizons. When he died in 1987, we decided that the world needed to remember Joe and his thoughts, but, realizing that we were not the people to write the story, what we could do was to preserve as much of his work as we could, for the scholars and researchers in the years to come.

In a luncheon meeting with Martin Marty and Bill Lesher, former President of the Lutheran School of Theology at Chicago, the idea of establishing a Sittler Archive at LSTC was introduced, as a way to create a resource for preserving the ideas of Joe for the future. Although Joe did not write a lot of books, he wrote articles, but primarily he spoke, preached, and conducted workshops for clergy and laity all over the country — in congregations and on college campuses particularly. He is doubtless best known for his 1961 plenary address to the World Council of Churches in New Delhi. So we began by contacting as many institutions as we could think of to gather audiotapes of sermons and presentations that Joe gave over the years, and the response was encouraging. Meta listened to all those tapes, and those we have continued to locate and add to the collection over the years. She wrote summaries of every one of those tapes and those summaries were deposited in the Sittler Archive.

The Archive now has extensive paper collections, and more than 125 audio and video tapes, together with books and anecdotes about Joe and his work.

We entered into an agreement with LSTC to be the keeper of the Archive, and set up the Sittler Archives Committee under the aegis of LSTC to oversee the Archive. The Archive now has extensive paper collections, and more than 125 audio and video tapes, together with books and anecdotes about Joe and his work. The Archive has led to a number of publications of papers and books, with more in the works. Many of the Archive’s materials, including the summaries of the audio tapes, are available electronically on the website at www.josephsittler.org

What the Archives Committee has always sought is not just the preservation of Joe’s work and ideas, but the dissemination of them to today’s world and the church. We are convinced that Joe’s ideas about the faith and the church are even more important today than they were in Joe’s time. We live in a time in which “grace” (a very important word for Joe) does not have the same standing that we believe it should have; and Joe’s sense of humor seems quite missing in the conversation of both church and world of today. His ecumenical sense was very strong, as was his conviction that God’s grace is broader and more inclusive than we could ever imagine. Joe’s understanding of that enormously grace-full God is much needed today, in our opinion. At the same time, Joe was very much a human being, grounded in the earthiness of humanity, a lover of polish sausage and beer.

One of our favorite stories about Joe is this: he once visited an elderly woman in the hospital. Later in the day, her doctor came in and asked how she was and she started describing Joe’s visit to her bedside. As the doctor listened to her description of the visit, he remarked, “My goodness, you make him sound like God.” And the woman replied, “God should be so lucky.”

We welcome your interest in and support of the Sittler Archive, which includes not only materials by and about Joe but also music by his musician wife, Jeanne. We encourage you to consult the website at www.josephsittler.org. To be added to the mailing list for the occasional Sittler Archives Newsletter, please notify our Sittler Fellow, Matt Frost at mfrost@lstc.edu 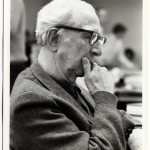