You are here: Home / Ministerial Formation / To Be “God With Skin On”

While pondering the idea of what are important ministerial character traits my first pastor Judith Boggs came to mind. A story I read in the Reader’s Digest years ago describes the role she played in my life: A mother was putting her two-year-old to bed and as she left the room he pleaded with her not to go. His mother tried to reassure him by telling him that God would be there with him all night. The boy replied, “But now I need God with skin on!” Pastor Judith Boggs was “God with skin on” for me.

Pastor Judith drew me back to the church after a 14 year hiatus. My parents had required weekly church attendance of me from age two until age 18. After that I avoided church. I did not seek out a church until led to do so by a book of Chinese wisdom: the I Ching. I studied the I Ching (Richard Wilheim, trans., Princeton University Press:1977) to align myself with the Tao and with my Higher Self (i.e. “the superior man” in the language of the I Ching.) At the beginning of Holy Week in 1984 I got the advice, “The superior man acquaints himself with many sayings of antiquity and many deeds of the past, in order to strengthen his character thereby.” It recommended not mere knowledge but application. Therefore I attended a “Jews for Jesus” seder and then went to receive communion at Rogers Park Lutheran Church on Maundy Thursday.

In the bulletin I read that all who wish to receive communion must believe in the presence of Christ in the sacrament. I did not. But I wanted to strengthen my character through this deed of the past. I was in a dilemma. Half way through the service Pastor Judith relieved my worry. She announced, “All who are present here tonight are welcome to join us for communion.” Whew!

I was very moved by the service and felt deep sorrow as the altar was stripped and we left in silence. I truly needed a happy ending and eagerly attended church on Easter. When Pastor Judith said my name as she served me communion on Easter, I began to sense the Presence of Christ in the sacrament.

I did not feel moved to attend church again until two months later when the I Ching guided me with, “The superior man joins with his friends for discussion and practice.” The text added: “In this way learning becomes many-sided and takes on a cheerful lightness, whereas there is always something ponderous and one-sided about the learning of the self-taught.”

I was self-taught in spiritual matters and it was all too true of me, so I went off to church that same day.

Pastor Judith’s sermon was about the same subject, and I was astounded. For the next few months I attended church regularly, and her sermon matched my weekly I Ching advice regularly. I knew the odds were against it and figured that God or the Tao must want me in church. One night I brought my I Ching to the parsonage and Pastor Judith showed me where the same things were written in the Bible. I never knew the Bible contained such wisdom.

When I invited Pastor Judith to ask the I Ching for advice months later her question was, “How can I deepen my spiritual life?” I was impressed that she should think her spiritual life needed deepening. I thought she was pretty deep already. Her openness and true spiritual seeking drew me closer both to her and to her concept of God.

I watched Pastor Judith forgive and love the members of Rogers Park Lutheran Church who slandered and thwarted her and I began to believe in Christ’s resurrection. She never asked me to join the church, but I did after many months of attending because of the miracles I witnessed as animosity toward her in the congregation gave way to forgiveness and cooperation. I wanted to be a part of that miracle.

As I attended church regularly there was one part of the service that never failed to strike me profoundly, and I didn’t at first understand why. During the hymn sung prior to the sermon Pastor Judith always stopped singing after the second verse and then knelt at the altar silent, with her head bowed, and her hands folded in prayer, as the congregation continued singing the last two verses. I often felt goose bumps or tears come up and had a hard time singing with a lump in my throat. A few times I had to stop singing too and just gaze upon her, humbly kneeling at the altar. Some months later I read in the I Ching in the 20th hexagram, “contemplation,” the words, “The ablution has been made, but not yet the offering. Full of trust they look up to him.” In the notes by the Christian missionary-translator Richard Wilheim, I saw why I was so moved, “If piety is sincere and expressive of real faith, the contemplation of it has a transforming and awe-inspiring effect on those who witness it.” I showed this to Pastor Judith and told her, “I sure hope you aren’t faking it.” She sincerely and earnestly replied, “Definitely not! I really need those prayers, especially with this congregation.”

Pastor Judith really respected me and affirmed my path to self-knowledge. I had been meditating regularly for nine months prior to returning to church and asked Judith to sit in silence with me several times. When she once commented that she was learning from me more ways to pray it threw me for a loop. I had not considered quieting my mind to be prayer, but recognized her truth when I heard it. I wondered if I were perhaps more Christian than I had believed.

When Pastor Judith bore the gifts of the spirit (i.e., love, joy, peace, patience, kindness, goodness, faithfulness, gentleness, and self-control–Gal. 5:22,23) to me, I became empowered to bear them to others. I became friends with a street person who used to sleep in the vestibule of my condo building. My fellow owners and my coworkers at my veterinary job all rejected and ridiculed me. Pastor Judith firmly supported me in that relationship with Bee that lasted ten and a half years and enriched me greatly. She also helped me love and forgive my persecutors.

When Pastor Judith accepted a call to Pennsylvania in the fall of 1986 she invited me to the parsonage to tell me privately. It was the first time ever that I cried freely in someone’s arms. As I told her I would miss her, she held me close and said God would always be with me. I sobbed, “I need God with skin on now.” Sharing the knowledge of the Reader’s Digest story, we both laughed heartily.

I was a lay representative in the Illinois Synod of the Lutheran Church in America from 1985-1989. At a synod meeting I told another pastor that I felt that God had taken off my training wheels when Judith left. He laughed. Little did I know how true that was because the ride certainly got rockier. Rogers Park Lutheran Church went many years without a regular pastor and I tried many different churches seeking that “God with skin on” in my life, to no avail. I completed the Rite of Christian Initiation of Adults (RCIA) in 1992 and joined St. Gertrude Catholic Church while remaining a member at Rogers Park Lutheran. I still felt lost and spiritually homeless.

In 1995 Pastor Bill Hutchison became our part-time pastor at Rogers Park. I was impressed when he officiated at my friend Bee’s funeral, let me run the show, and joined in the revival mood with joy. Although he firmly believes that belief in the presence of Christ is essential in the Eucharist, at my request (and explanation of why) he welcomed all present to join us in the sacrament. With his part-time role I hesitate to ask for his time too often, yet each time I have he has freely given his undivided attention and true concern. In my times of real need he has dropped everything to be there for me.

Under Pastor Bill’s guidance and love I see our church again undergoing miracles and I am feeling at home again. I dropped my membership at St. Gertrude’s a few months ago and will soon begin associate minister training with several others at Rogers Park. Through the love, respect, and encouragement shown to me by Pastors Judith and Bill I now can see that the character called for in a pastor or minister is to be “God with skin on” for others. But more than this: We need our ministers to empower all congregation members to fully realize that, by grace and through Christ, they are also “to be God with skin on” for others in need. 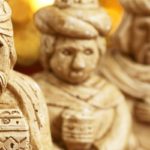