You are here: Home / Ministries of Word and Service II / On the Receiving End of the Ministry of Healing

Over the past several years I have had plenty of opportunity to think about disease, pain, suffering, medical science, and faith. Afflicted by colon cancer, I had a colectomy on August 26, 2006. I received a chemotherapy protocol that lasted almost a year, during which I experienced dry mouth, nausea, and rashes and lost hair, weight, and red blood cells. I had to be hospitalized on the morning of Good Friday and remained in the hospital until Easter Tuesday because of a high white blood count and chronic diarrhea. Thanks be to God, I bounced back quickly once the chemotherapy ended and so far, two years later, remain cancer free. I consider myself healthy, albeit broken after a fall from a ladder on July 5, 2008 shattered my left elbow and required an elbow replacement.

I don’t think I have suffered more than other people or that what happened to me is abnormal. In fact, it is quite normal as far as this world is concerned. Perhaps you have had the experience that once you’ve been diagnosed with a condition, suddenly you find out about all the other people who have the same condition. Going to the cancer center to get my regular injections of chemotherapy was an eye-opener as to how normal treatment is. With due allowance for the kindness of the staff, it was like an assembly line with people coming in to get hooked up to their chemicals. Now our local hospital is building a bigger and better cancer center to accommodate more patients and services. The same is true of the bone and joint clinic where I go for physical therapy. An amazing number of people come and go for therapy.

As a pastor and theologian experiencing sickness, I wondered about the root causes of sickness. I thought about that unholy trinity of the world, the flesh, and the devil that is out to undermine the work of the Holy Trinity. The world is a fallen reality. It is the environment in which we live; and our environment is sick, and people who live in unhealthy environments get sick. Some environments are more prone to produce disease than others if the air, ground, or water is fouled with toxic pollutants.

The devil is evil personified. We no longer attribute accidents, miscarriages, and personality disorders to the devil. But demon possession is still known in some parts of the world, and evil systems abound that oppress people and cause mental and physical disorders. The proximity of occupying Roman legions cannot be separated from the demons who called themselves “legion” when they possessed the Gerasene demoniac in Mark 5.

I tried to fit my colon cancer into these categories. Was it the flesh? I’ve tried to improve my diet over the years, but there’s still some amount of gratifying the desires of the flesh. I have a “sweet tooth”. On the other hand, I may have a genetic predisposition because of the history of cancer in my family. A lot of research is going into the relationship between certain cancers and genetic markers. In neither case would my cancer have been something I could have averted; it just happened to me. My siblings, raised on the same diet (which some of them still eat) and marked with the same genes, may nevertheless be spared. Food and genes. Why should these things that contribute to life be bad for us? I guess they’re evidence of an additional issue: a creation that is subjected to futility and groans in pain waiting for its redemption along with ours (Romans 8).

So what should people of faith think about all this? The gospels are full of stories of Jesus healing the sick and expelling demons. Jesus’ healing ministry testified to God’s desire to restore the wholeness of his creation. It affirmed that God does not regard sickness as normal. The ministry to the sick employs a sacramental sign—the oil, a soothing balm—to proclaim God’s war on suffering and pain.

The oil has been misunderstood. It came to be associated with the last rites of the church and was called “extreme unction.” It was no longer a sign of health but of death. On the other hand, it came to be regarded as a miraculous cure to be used when medicine failed. That’s not what the ancient church intended. Its true purpose is neither preparation for a peaceful death nor the restoration of health, but the proclamation of the coming of God’s kingdom. The person anointed with this blessed oil is claimed for God’s kingdom in which wholeness is restored, death is defeated, and sorrow and sighing are no more, no matter what his or her affliction is in this world. The anointing is to proclaim that disease and suffering, which are so normal in this world, are abnormal in God’s kingdom.

The minister of the church, the servant of Christ, does not anoint the sick to supplement or replace modern medicine. Modern medicine is a noble effort to work toward health, although it can also be taken captive by the ways of the world, sinful selves, and demonic structures. The collusion between physicians and drug companies, and the concomitant reluctance of mainstream medicine to consider more holistic approaches to healing, is a case in point. No, the ministry of healing does not supplement or replace medicine: it serves to make the sick Christian a martyr.

That’s right, a martyr. What is a martyr? A martyr is a witness to the kingdom and power and glory of God. St. Stephen, at his stoning, saw “the heavens opened, and the Son of Man standing at the right hand of God” (Acts 7:56). A martyr is one who shares in the life of Christ. Christ in this world is “a man of suffering and acquainted with infirmity.” But “he has borne our infirmities and carried our diseases” (Isaiah 53). The healed Christian is a witness to that and, like the Gerasene demoniac, must proclaim “how much Jesus has done for him.”

Through the suffering of Christ, and the pain of God the Father on account of the passion of His Son, all suffering acquires a meaning; and by the faith-producing work of the Holy Spirit, even suffering becomes a sign of the victory of God the Holy Trinity over the unholy trinity of the world, the flesh, and the devil. How I longed for a servant of Christ to proclaim that victory to me at Eastertide 2007 when I was at low ebb. How glad I was for the Methodist minister and professor who visited me on Easter afternoon and proclaimed and prayed for the victory of God over the powers of evil, seen in the resurrection of Jesus Christ, to be applied to me through the healing power of the Holy Spirit. 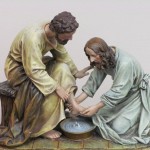