You are here: Home / The Church's Mission in Financial Recession / “Religionless” Again for the First Time

I have made two visits to St. Augustine’s House in Oxford, Michigan. The first was in 2006, after my second year of divinity school and my summer clinical pastoral education unit with a hospice care provider, and before my endorsement interviews and my wedding. The second, deferred for the sake of internship, the arrival of a child, ordination, and the arrival of another child, was this February.

There is plenty to admire about North America’s only Lutheran monastery, starting with the opportunity to use the phrase “North America’s only Lutheran monastery.” The frequent and, as it were, impersonal quality of prayer in the Benedictine ordo is bracing and emotionally powerful in a way that liturgical life rarely is. The relative simplicity of life without wireless internet, late-night chatter, or an abundance of consumer choices can feel downright rigorous for those of us who pass four Dunkin’ Donuts locations on our commute. There is silence and space to read, write, reflect, and pray as the Spirit, seldom so unconstrained, moves us. There is the amiable and edifying but unobtrusive companionship of Father Richard, Father John, and the lay oblates.

It is a fine place to have one’s vocation tested and deepened. I brought Dietrich Bonhoeffer’s Letters and Papers from Prison for both visits. While I’d read my share of Bonhoeffer before that first visit, I had mostly neglected his work since. After the martyr’s star reached a new zenith in the reception to Eric Metaxas’ 2010 biography, a book marketed heavily to American evangelicals, it seemed good to dig back into these thoughts and words of the theologian who catalyzed my own sense of vocation.

It is easy enough to miss, or at least I did, that the letters have an almost novelistic arc. His and his family’s hopes for a prompt resolution to his imprisonment are taxed, disappointed, and finally abandoned. The letters to family keep up a brave face while those to Eberhardt Bethge confess greater spiritual trials. Dedication to work waxes and wanes; the world of the prison is embraced or held at arms’ length. And theological questions gain a sharpness that they rarely have elsewhere, partly because of the brevity and casualness of the format, partly because of the extremity of the circumstances, and partly because, in monastic fashion, incarceration leaves the theologian with a lot of time to think.

Most striking to me was coming upon the passages on “religionless Christianity” again. When I read it five years ago, it needed considerable decoding (partly because I hadn’t read Barth at all yet):

Our whole nineteen-hundred-year-old Christian preaching and theology rest on the “religious a priori” of mankind. “Christianity” has always been a form — perhaps the true form — of “religion.” But if one day it becomes clear that this a priori does not exist at all, but was a historically conditioned and transient form of human self-expression, and if therefore man becomes radically religionless — and I think that that is already more or less the case (how else is it, for example, that this war, in contrast to all previous ones, is not calling forth any “religious” reaction) — what does that mean for “Christianity”? It means that the foundation is taken away from the whole of what has up to now been our “Christianity,” and that there remain only a few “last survivors of the age of chivalry,” or a few intellectually dishonest people, on whom we can descend as “religious.” Are they to be the chosen few? Is it on this dubious group of people that we are to pounce in fervour, pique, or indignation, in order to sell them our goods? . . . . If religion is only a garment of Christianity — and even this garment has looked very different at different times — then what is a religionless Christianity?

Barth, who is the only one to have started along this line of thought, did not carry it to completion, but arrived at a positivism of revelation, which in the last analysis is essentially a restoration. For the religionless working man (or any other man) nothing decisive is gained here. The questions to be answered would surely be: What do a church, a community, a sermon, a liturgy, a Christian life mean in a religionless world (30 April 1944).

A five-year interval transformed this letter from an intriguing speculation into an immediate and unyielding question. I managed to forget the argument surrounding the phrase “religionless Christianity” only to reconstruct it through the experience of the years that followed. It was still possible in 2006 to speak of a religious revival in American life, at least as witnessed by the late Bush administration’s close working relationship with white evangelicals and right-wing Catholic intellectuals. The “culture wars” still had a religious coloring, and the sense, on religious right and secular left alike, that the former was “winning” was still very much in the air.

Five years later, it is hard to speak in the same terms. A world-changing economic downturn has so far been met with no sustained “religious” reaction; even in the Arab world, high unemployment and food prices have led to rather more “secular” than “religious” protest movements. The American culture wars have shifted heavily to economic issues. George W. Bush scored points by citing Jesus as the most important philosopher to his worldview; today’s Republican primary field is likelier to produce paeans to Ayn Rand than references to spiritual conversion. This is not to suggest that anything of significance changed in America between the last summer of the 109th Congress and the first winter of the 112th. Rather, almost every “religious” event that fell during these years tended to fracture the alignments of religion with politics, economics, and race, always leaving religion per se with the smaller space. And this has tended to confirm my experience of moving in circles where political views, for instance, are held with considerably more passion and immediacy than religious ones. People are not necessarily hostile to religion, but they would by no means acknowledge such a thing as a religious a priori of humankind.

Despite great expenditures of money, energy, and thought to that end, I don’t see signs that Bonhoeffer’s questions have been answered, at least by the churches. Admirable (and unadmirable) attempts have been made to lower what economists might call “barriers to entry.” Barth’s distinction between religion and the gospel has been rediscovered even among evangelicals. Efforts at confessional or moral or liturgical repristination have been launched, doomed as always to being marginalized or co-opted. Yet, perhaps because we are still only groping toward an understanding of Christian community that is not hemmed in by the assumptions of our long-past religious heyday, it has been hard to see the effects of these trends. Perhaps we suspect that the last chivalrous souls are out there hiding in jeans and earbuds (and in my experience, this is not all that unlikely). New ways of addressing a culture that, rightly or wrongly, feels itself to have come of age are still sought and still very much needed.

All I can say in response to that search is that a place like St. Augustine’s House is a good place to provision oneself. The fascinating thing about a monastery in our day and age is that it has had to leave behind any notion of a religious a priori for humanity. That has always been the chief virtue of monasticism: that it lifted the faith out of the demotic role of the answer to any human question and into a role of radical critique and alternative to the world. Perhaps it embodies not a religious a priori but a religious terminus ad quem, not a premise from which to proceed or a question in need of answering but a conclusion, however partial, to a search that may at last begin virtually anywhere. 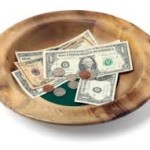