St. Andrew Lutheran Church’s engagement in cross-cultural ministry began in 1999 when members and the pastor talked about what mission and ministry should look like for them as they endeavored to faithfully proclaim the gospel in the context of West Chicago. This far west suburb of Chicago in DuPage county is just over half Hispanic/Latino. Church leaders, working with World Relief, started to offer ESL and citizenship classes to the community. Eventually the church decided to begin offering weekly worship services in Spanish, as well as services such as Quinceañeras (the 15th year birthday celebration), and a first communion program. In partnership with the Synod/ELCA, St. Andrew called a Spanish speaking associate pastor, and the congregation continued to grow.

The congregation decided to call one bilingual pastor in 2012, and I accepted the call to St. Andrew in November of 2013. Each weekend I lead two worship services in Spanish (Saturday at 12:00 noon and Sunday at 12:00 noon) and two in English (Sunday at 8:00 – traditional and 10:00 – contemporary). Over half of our roughly 250 people who attend worship are Hispanic/Latino, which mirrors that of our community’s demographic.

Even though we have two distinct cultures and languages, we continue to grapple with what it means to be one church. Though many of our ministries reflect one culture or the other, others are very well integrated, in particular our confirmation and youth ministries. Most of our worship services are in either English or Spanish, but we intentionally offer bilingual worship services on occasion. When we do, I try to be clear about the purpose: so that we can worship together as one congregation. As the psalmist says: “How good and pleasant it is when God’s people live together in unity! (Psalm 133:1)”

Last January, Eric Law gave a workshop for our Synod on multicultural proficiency at St. Andrew, and members from both cultures participated. One of the things he talked about was the importance of intentionality and invitation in multicultural community. He invited an English speaker and Spanish speaker up and asked them: “Are you able to communicate?” Then he asked how many people were bilingual, and a few raised their hands. He then invited one of them to interpret their conversation. He also led us through a bible study using his “mutual invitation” method, which we have subsequently used for bilingual bible studies.

My experience in multicultural ministry is that it is often messy, but never boring, with many beautiful moments. There have been new Anglo families that have started attending St. Andrew because they are attracted to cross-cultural community. There are people who used to be reluctant, and even held misunderstandings about the other culture, but have seen their reservations erode as they got to know some of them.

Those for whom various cultural traditions were foreign, have attended a Posada (the nine-day reenactment of Mary and Joseph’s pilgrimage to Bethlehem) at someone’s home, and have had a great time. In addition, some of our Posadas are hosted by our Anglo members. Our most recent Posada this past year took place with over 300 people at St. Andrew singing Christmas carols in Spanish and English, eating different types of foods and breaking piñatas. These and other interactions are beautiful moments which provide glimpses of the wonderfully intricate tapestry that is the Kingdom of God. 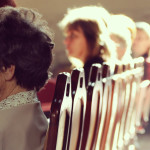