You are here: Home / Preaching Advent / On the Way: Rise and Fall

In his brief, astonishing novel Waiting for the Barbarians, South African author J.M. Coetzee imagines a town on the frontier of a nameless Empire, in a state of continual hostilities with its “barbarian” neighbors. As the story’s climax nears, the main character—a fallen functionary of the Empire—goes for a sunset walk outside the walls and drifts into a reverie of living off the land. “I am not unaware of what such daydreams signify,” the narrator says. “Without exception they are dreams of ends,” and apart from the children—who imagine only an unending pattern of growth and life, growing up and growing old where they were born—everyone in the imperial town has them. “What has made it impossible for us to live in time like fish in water, like birds in air, like children?” he asks himself. “It is the fault of Empire!”

Empire has created the time of history. Empire has located its existence not in the smooth recurrent spinning time of the cycle of the seasons but in the jagged time of rise and fall, of beginning and end, of catastrophe. Empire dooms itself to live in history and plot against history. One thought alone preoccupies the submerged mind of Empire: how not to end, how not to die, how to prolong its era. By day it pursues its enemies. It is cunning and ruthless, it sends its bloodhounds everywhere. By night it feeds on images of disaster: the sack of cities, the rape of populations, pyramids of bones, acres of desolation. A mad vision yet a virulent one: I, wading in the ooze, am no less infected with it than the faithful Colonel Joll as he tracks the enemies of Empire through the boundless desert, sword unsheathed to cut down barbarian after barbarian until at least he finds and slays the one whose destiny it should be (or if not he then his son’s or unborn grandson’s) to climb the bronze gateway to the Summer Palace and topple the globe surmounted by the tiger rampant that symbolizes eternal dominion, while his comrades below cheer and fire their muskets in the air.

After reading this book in one night during the feverish months leading up to the 2004 election, I have never been able to forget that passage and that depiction of Empire as the creator and victim of history. It is most evident in our still unrestrained obsession with external enemies—with their identification, detection, and elimination, however minor their means of chaos. But Empire is fractal-like in its regularity. As the New Yorker recently reported, the indiscriminate use of antibiotics has damaged the awesome diversity of microbial life that has co-evolved, often beneficially, with human beings.

Every civilization, ours emphatically not excepted, carries within it the seeds of its own terminal pathology, and every civilization grasps this to a more or less conscious degree.

Every civilization, ours emphatically not excepted, carries within it the seeds of its own terminal pathology, and every civilization grasps this to a more or less conscious degree. At some point the drone attacks, the antibiotic courses, the emergency surgeries on the global financial system, the engineered accommodations to our rapidly changing climate will stop working. Most of us dare not imagine beyond that moment, but if you wish to, there are books that will help you do it: The Fate of the Species by Fred Guterl contemplates a number of plausible scenarios, supplementing the genre so recently revived by Jared Diamond’s Collapse.

We commute this awful knowledge into smaller, more manageable fears—among them, to be honest, the dread of our side losing a presidential election or the anxiety that Jesus might drop from the sky in an instant that freezes our ability to think differently of our lives. And we try to deny it in as many ways as we can; witness the quadrennial competition between presidential candidates to pledge more rapturous fealty to the quasi-theological doctrine of American exceptionalism.

Needless to say, I do not want any of these things to happen and I prefer to live in daily denial of their inevitability. Which is why Advent appears as an unwelcome death’s-head at the crowning of the year, between the end of what our leaders nonchalantly call the Afghan “fighting season” and the opening of a new tax year. “Heaven and earth will pass away,” Jesus says, in words that have never gone out of date. “But my words will not pass away,” he concludes, hopefully but obscurely.

Our sacred text witnesses to the memory of a world we have not known, a world of immediate dependence on nature and its God, and to our abandonment of that world for one of putative mastery.

Like many Lutherans, I am not much for eschatological thinking. But if the Bible can be read as a story where sin begets history—where the primal disobedience of the first humans inaugurates the need for cultivation and surplus, the agricultural roots of Empire; where the second sin exalts the farmer over the wandering herdsman—then it’s a story that probably doesn’t have too many chapters left in it. Our sacred text witnesses to the memory of a world we have not known, a world of immediate dependence on nature and its God, and to our abandonment of that world for one of putative mastery. We overcome the briars and thistles, we dam up time’s river, we make war against the micro-biotic biome that wreathes us inside and out, and we put our hearts and souls into improving and extending the ghoulish mimicry of the Kingdom of God we thereby create. It is, without doubt, a thing of wondrous beauty, terrible power, and awe-inspiring brilliance. I am torn, quite honestly, between loyalty to that thing—that Empire of human aspiration that begs to be preserved by reforming zeal, reactionary violence, or both—and doing what Jesus tells us to do, which is to wait, and watch, and know that there is something more than it for us to inherit. Max Weber opposed these demands under the titles of “ethic of responsibility” and “ethic of ultimate ends.” Luther’s “Two Kingdoms” theology demands accountability for both preserving the fallen world as best we can, and for imagining that it will serve a divine purpose it cannot itself fulfill.

It has always been easy enough to shrink Jesus’ words in these apocalyptic passages. Given the chance, humans seem to prefer infantile fears to real ones, and the promise that getting one’s heart or other organ of subjective orientation “right” with Jesus will save you from the pangs of the end time fits the former nicely. That’s not what Jesus seems to be saying to his friends, however. He counsels courage, virtue, and endurance when the world loses its way and the assurances it confers on itself fail. Unlike the ancient church, I do not often pray for Christ to come soon. It is fall outside and the leaves are still gorgeous, even on the ground. But I pray that all the Church would have those things when we need them and, just as importantly, when the world needs us to have them.

Many of these sermons, columns, and articles — Rev. Dueholm’s included — have grappled with the eschatological character of the Advent texts and season. How do you make sense of this strange, even discomfiting, juxtaposition? 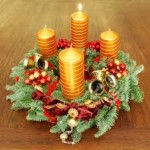