You are here: Home / Reclaiming Lament / On the Way: Vision for Ecumenism

In 1983 in Vancouver, the Assembly of the World Council of Churches articulated a “eucharistic” vision which

…unites our two profoundest ecumenical concerns: the unity and renewal of the church and the healing and destiny of the human community. Church unity is vital to the health of the church and to the future of the human family… Christ – the life of the world – unites heaven and earth, God and world, spiritual and secular. His body and blood, given to us in the elements of bread and wine, integrate liturgy and deaconate, proclamation and acts of healing… Our eucharistic vision thus encompasses the whole reality ofChristian worship, life and witness.

The Metropolitan Chicago Synod continues to be committed to ecumenism.  Bishop Paul Landahl, as chief ecumenical officer of the synod, has appointed me to be the synod’s Ecumenical Officer.  My responsibilities are to maintain connections with our official partners as well as our sisters and brothers in other church bodies.  I will also maintain conversations with the Jewish and Muslim communities.

Ecumenism has had its ups and downs over the years. Pope John XXIII opened windows in the Roman Catholic Church that brought a fresh gust of ecumenical ruach into the Roman church. That gust then invigorated Christian churches throughout the world.  Since then the Spirit/Wind has continued to blow where she will, encouraging sisters and brothers in Christ to talk to one another and to listen to one another.

There is no question of the importance of ecumenism for every Christian church body.  Jesus prayed for it the night before he was offered up in sacrifice for the world.  He saw the unity of the church as a necessity for the good of the whole world.  For the apostle Paul, unity was the way the world could see God’s love for all – by how Christians “loved one another.”  So we keep church windows open that the gusts of the Spirit might refresh us.

One of the refreshing and renewing gusts we are experiencing now is the result of our relationship with the Episcopal church. Since 1989 our synod and the Roman Catholic Archdiocese of Chicago have been in covenant.  The archdiocese and the Episcopal Diocese of Chicago are also in covenant.  The two committees which support these covenants have agreed that we should be working together, and plan to do so as this issue goes to press.

Oursynod and Bishop Landahl are involved in the Ecumenical Millennium Committee which was organized to help Christians in the metropolitan Chicago area work together in this new millennium to proclaim the Good News of Christ. This committee organizes the Service ofPrayer for the Week of Prayer for Christian Unity.  This year it will be Friday, January 23, 2004, at 6:30 p.m. atBishop Quigley Seminary in Chicago. This is an opportunity for sisters and brothers in Christ to give thanks to God in Christ and pray with Christ for the unity of the church.

I only recently was appointed as ecumenical officer.  I need help to identify other existing inter-church relationships and discussions.  If you have contacts with other churches, whether formal or something you do over coffee once in awhile, let me know.  If there are arenas which need the support or involvement of the Metro Chicago Synod, please write to me.  We need to keep those windows open so the Spirit’s movement is not hindered or prevented. 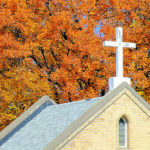