You are here: Home / Reformation Jubilee 500 / “Are you ignorant of what it means to be ignorant?”: Luther’s Insults 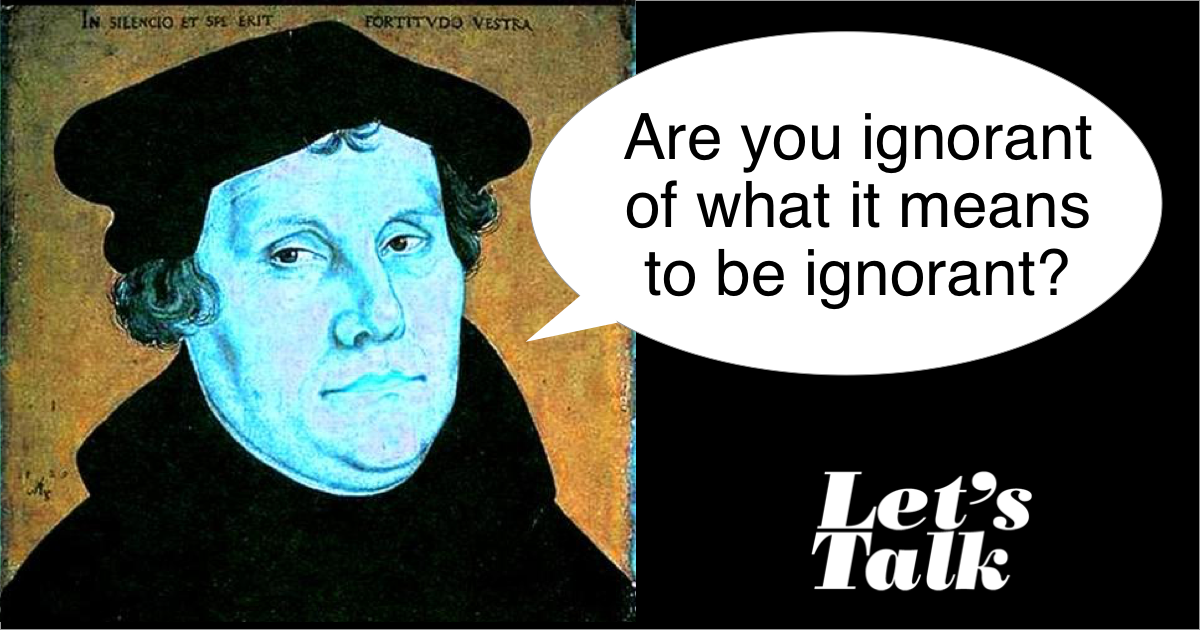 That’s my favorite Lutheran insult. I’ve used it often. It’s wonderful when people look at me after I say that to them and go, “Huh?”

It all began in Kurt Hendel’s “Theology of Martin Luther” class. Dr. Hendel’s final project had two requirements: it should be about Luther and it should be creatively you. One day during break between classes, I found myself on a website called “The Shakespearean Insulter”. A classmate looked over my shoulder and said, “Luther’s insults are better. You should make one for Luther”. That’s how it all started.

At first, the project was simple: search for insults to make reading Luther interesting. He’s spectacular at times, and other times he’s theologically dense, as all theologians are from time to time. And you really had to read Luther to find his better insults; they didn’t just pop off the page. So I read Luther and highlighted every insult I found. Of course, that means someday someone’s going to inherit the volumes of Luther’s Works that I own, and they’re going to find every insult throughout the books highlighted. Nothing else; just the insults. Imagine opening to “The Bondage of the Will” and the only thing highlighted is: “You are dumber than Seriphian frogs and fishes” (LW 33:77).

After collecting enough insults, I made the website. That was easy. Then came beta trial time. I emailed 3 friends – just 3 – and said, “Made something new; looking for feedback. Tell me what you think.” No one replied to my email. Instead, they shared it. Within 24 hours, I was so popular that I’d received an email from Concordia Publishing House about not having proper citations (I don’t know how they found me… the only personal information on the site was my name). I wasn’t actually ready to launch, but the site had gone viral already.

I had thousands of hits that first day. Within a few weeks, the site had been cited on numerous websites, some in love with it and some using it to show how backwards Luther and all of Christianity is. Soon pastors had tweeted it, renowned historians had quoted it, reputable newspapers had articles on it, and someone even made mugs out of it. I was just having fun with a final project, and suddenly this little site was popping up everywhere.

I imagine Luther as a man who knew that sometimes God has to kick the mule in order to get it to turn, to use one of Luther’s more famous images of the bound will, where humanity is ridden by God like an ass (LW 33:65-6). It’s apparent Luther was kicked many times by God before he started walking the direction God wanted. “How are we going to turn Luther into a monk? Kick him with a lightning storm. Then that stubborn donkey is sure to move!” And Luther used the same method from time to time in the form of insults when he thought someone was going the wrong direction. Whenever he came across anything he found to be theologically erroneous and ruinous of the faith, he wasn’t afraid to kick them in order to get them to turn.

To put it more theologically, Luther knew that God, who is good, cannot act in an evil way; and yet uses evil as a tool (LW 33:176-8). This use of evil for good is summed up in Luther’s concept of God’s alien work of judgment; wrath for the sake of grace (LW 16:233-4). It’s not God’s proper method, but from time to time God has used wrath as a tool for grace. Luther did the same with insults. Not that you’re going to find a writing by Luther that’s pure insults; you won’t even find one that’s 25% insults. It’s not his main tool; it’s an alien work. Luther is mostly arguing and persuading and proving his points. But he’s not afraid to rip into someone to make it clear how atrociously heretical they’re being at the moment, and the more heretical you’re being, the more he’s going to diss them out. You want to SELL grace!? Well, I think “you are the most insane heretics and ingrafters of heretical perversity” I’ve ever met! (LW 31:88). “What you say is a blasphemy that has made you worthy of a thousand deaths” (LW 31:154).

Maybe our theological hearts can’t make sense of such insults in light of Jesus’ words, “anyone who calls another an idiot shall be in danger of the fire of hell” (Matthew 5:22). But Luther always did prefer to “sin boldly, but trust the Lord thy God all the more boldly.” Besides, he didn’t just reserve this tool for his enemies. You could be his best friend, but if you’re straying from the path, be prepared for Luther to conjure up a visceral image of your heresy.

The longest insult I have found to date wasn’t aimed at some theologian or the Roman Catholic Church of the 1500s or anything like that. It was in a sermon on keeping kids in school. A sermon! That thing pastors do for the sheep in their care. But Luther felt free to insult his own flock if that’s what it took to get them to turn and go the right direction. Sometimes you’ve got to kick the mule. And what an insult! Here’s a sample of the full thing: You know how much of “an accursed, ungrateful wretch” you are for not keeping your kids in school? You who “have everything, all of it free of charge”, are causing the kingdom of God to go to ruin. You’re causing pestilence and syphilis to spread like wildfire, tyrants to rise up and destroy us, and God to “pelt and shower us with nothing but devils [and] let brimstone and hell-fire rain down from heaven and inundate us one and all in the abyss of hell, like Sodom and Gomorrah” (LW 46:254). Now are you going to get your kids back in school or not?

In terms of rhetoric, it’s an effective tool that maybe ought to come back into our arsenal in one form or another. Or as many people say to me today in relation to raising youth: Punishment is never a first resort nor is it the ultimate goal, but if we can’t or aren’t willing to punish our kids when they do wrong, they’ll never learn. Or, as the dear Dr. Hendel once said to a class of future pastors: “You’re being given the office of the keys, dear people, to bind and to loose, the keys to heaven and hell, and you better be willing to use both of them.” The alien works of God ought to be the alien works of humans as well, but the Law and its results have their place in the realm of calling people to the Gospel.

I’m not sure what Luther would think of my site if he were alive today. Maybe he used such rhetoric in his day-to-day fully-sinner moments, but from what remains in his works, what I see are insults that are hyper-contextual. They were a rhetorical tool, not a quotable-quote. But Luther also knew that once the printers got ahold of his works, they weren’t his anymore. I’d imagine, at least during those table talks, he’d pull up the site for a laugh. I can imagine him and his friends having a merry round throwing Luther insult after insult at each other, knowing that when people can laugh with each other we’ve reach one of the points at which humor is holy.

It’s with that image in mind that I created this site. So it greatly bothers me when people use this site to show that Luther was a vindictive ass (donkey) and that all of Christianity is backwards. Because this site isn’t that at all. At its best, this site lets me tap into Luther’s underappreciated rhetoric and use it to take the Devil and all the works of Evil, throw some good insulting feces in their face, and laugh at the fact that Satan is an “ass to cap all asses” (LW 41:212) whose best words come out of the mouth “from which the farts come” (LW 41:280). That’s truly holy Lutheran humor.

After five years, I’m still getting about 200 visitors daily. Occasionally I find it mentioned in articles, most recently this March in the magazine First Things in an article called “Pope Francis as Historian” by Bronwen McShea (who again simplifies these insults to creative name-calling and doesn’t recognize them for the tool they are). Every few months I get a spike of 1000 to 5000 hits in a day. Once in a while, so much more than that. My favorite moment was when Reddit crashed my site. My web host only allows 75,000 database queries in an hour. Suddenly friends are messaging me that my site’s down. I was able to find a work around rather quickly and get it back up, but 75,000 visits in an hour! It ain’t as good as the Reformer himself by any means, but if the way you get into Martin Luther is by reading the salty parts of his Twitter feed, well – it’s a start to some of the best theology in history.

Tyler Rasmussen is the creator of the the Lutheran Insulter website (ergofabulous.org/luther).