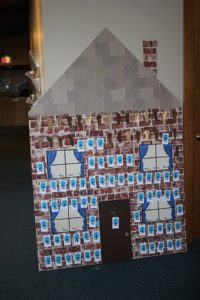 On January 1, 2016 Messiah Evangelical Lutheran Church in Wauconda starting counting down to the 500th anniversary of the Reformation. We calculated this date as 95 weeks prior to this commemoration (October 31, 2017), constructed a replica of the Castle Church Door in Wittenberg, Germany, and began nailing, one each week, not Luther’s 95 thesis, but 95 acts of unity and reconciliation in the church. This idea was inspired by the July 8, 2015 Christian Century article, “Repent and Celebrate,” which called God’s people to prepare for this worldwide moment by focusing on Christian unity.

A few examples of our postings include, “The Augsburg Confession was an attempt to restore religious and political unity in the Holy Roman Empire at the time of the Reformation;” “German Theologian George Calixtus attempted to unite all of Christianity, but especially Lutherans and the Reformed communities; during the first half of the seventeenth century on the basis of what he perceived to be an agreement regarding essentials during the first five hundred years of the church’s history. Thus it was called ‘consensus quinquesaecularis;’” and “On the 23rd of August 1948, in Amsterdam, the World Council of Churches was officially founded. 147 churches from different confessions and many countries came together to commit themselves to the ecumenical movement.”

Our postings include mergers, ecumenical agreements, harmony among church leaders, interdenominational worship, and local partnerships and activity. For example, “On Tuesday, June 14, 2016, the Wauconda Island Lake Ministerial Association (WILMA) met at the Transfiguration parsonage. Father Ron Gollatz prepared a meal for us and Pastor Ben Dueholm said a blessing upon Father Ron’s retirement.”

Yet of all our postings, posting 61, from the 2016 Metropolitan Chicago Synod Assembly, has had the greatest impact on our congregation, the ministerial association, and the county. “Augsburg Fortress CEO Beth Lewis encouraged congregations to work ecumenically on new projects and efforts in the year leading up to the 500th anniversary of the Reformation.” When I attended the 2016 synod assembly, I was so excited about Messiah’s “Castle Church” door and I have always felt blessed by our local partners in faith, the Wauconda and Island Lake churches, with our monthly support and fellowship, ecumenical worship services, and annual community picnic and bake-off. But in her workshop on observing Reformation 500, Augsburg Fortress CEO Lewis challenged attendees to work together in local ministerial associations on new and visible community efforts. “Try something new together” was her challenge.

Not long before, I had attended a North Conference meeting for our synod at Joy! Lutheran Church in Gurnee and heard about an initiative their congregation was supporting called “Housing First.” This effort of PADS Lake County provides housing first for a homeless individual and then that person is better positioned to benefit from other needed services. I learned that it would take 90 people giving $10 a month to house one homeless person for a year. I knew immediately that Messiah could do this ourselves, but then remembered the words, “Try something new together.” We had already built a door at Messiah, why not construct a small house? So we built a makeshift house with 90 small hooks. Then we hung 90 keys rings that read “A Path Home” on one side and “Churches Together for Housing First” on the other, and affixed to these key rings was a business card with a giving link. With our strong partnership already in place, it was not difficult to build support among the WILMA congregations.

We kicked off the project at the Service of Prayer for Christian Unity just before Lent of this year. We started transporting the house from church to church in my colleague’s mini-van, and by the fourth week in Lent, we had provided housing for not just one, but two, homeless individuals. We are currently close to housing a third.

This is only the beginning. There are approximately one hundred and thirty people in Lake County meeting the federal definition of chronic homelessness. Currently one hundred are housed using federal dollars, two are housed by Joy! Lutheran in Gurnee and two by our ecumenical ministerial association. Two others nearly have the funds to receive housing. This leaves twenty-four chronically homeless people needing an address and a key. A steering committee has been formed, made up of participants from PADS, Joy! and WILMA. We have determined that it will take 2250 people in Lake County giving $10 each month to eliminate chronic homelessness in our county. With marketing support, our plan is to pick a month sometime between October 2017 (the 500th Anniversary of the Reformation) and the spring of 2018 to raise the funds for the remainder of this housing. Unity and reconciliation, a door and a house, are blessing the vulnerable of Lake County.

“My people will abide in a peaceful habitation, in secure dwellings, and in quiet resting places” (Isaiah 32:18).