“My child,” Jesus ben Sirach is recorded to have said, “when you come to serve the Lord, prepare yourself for testing.” Last year, we on the editorial board of Let’s Talk decided to ask Lutheran seminarians about the developments in the church for which they were preparing. What technological, cultural, and theological changes did they expect to shape their careers in ministry? These pages have documented many of the controversies that have absorbed generations of Lutherans. What, we wondered, are those who will enter the ranks of the clergy in the next few years expecting to struggle with? The answers our respondents gave all focused on the kinds of testing the church and its leaders will face.

Joseph Signore, a student at Concordia Seminary in St. Louis, offered us a strong and principled defense of the ideal of sexual purity in the midst of a culture that is increasingly bereft of such idealism. The church has not been addressing sexual issues adequately. “If the average child is exposed to pornography by eleven years of age,” Mr. Signore says, “there is no reason we should not be talking about this to children that young.”

Niles Eastman at the Lutheran School of Theology at Chicago takes on another area of concern with which the church has long and unevenly grappled: the role of prophecy in answering the alienation of young people from the church. The era of automatic deference to the church is ending. “Tomorrow’s Church must continually prove its sincerity” as it speaks on behalf of God’s justice in the world.

D. Tracy Howe at the Harvard Divinity School sees matters of justice at the heart of the church’s future, too, but emphasizes the gracious power of mourning and lamentation in breaking down barriers of race, class, and privilege. “We must embrace the fullness of the story because the depths from which we are redeemed is proportional to the measure of the glory of God, which as Christians we seek. We must mourn all parts and believe for transformation.”

The Growing Gap Between Faith and Practice

Dan Kuckuck of the University of Chicago Divinity School asks, regarding declining religious participation, something that has surely crossed the minds of many clergy: “Indeed, the body of Christ is already being challenged, and we must wonder what shape the body of Christ can take if practice dwindles to zero.” Mr. Kuckuck’s essay addresses this unsettling question directly and critically.

A similar topic is taken up by our contest runner-up, Joseph Seifert of Concordia in St. Louis. After establishing that “post-congregational Christians” are increasing in number around the world, Mr. Seifert assesses the inadequacy of some of our current church development trends to respond. “The preaching should actually do something; it should give us Jesus,” Mr. Seifert argues.

Finally, in his winning essay, Miles Hopgood of the University of Chicago locates the challenge that will define the future of the church in “the changing face of Law and Gospel.” Lutheranism in America and around the world has been enriched immensely by the influence of cultures outside of our tradition’s early homeland in northern Europe and North America. “The truth of discerning between Law and Gospel,” Mr. Hopgood writes, “if it is to be the essential element of Christian identity that we Lutherans have held it to be, must be a bond used to unite a diversifying and changing church.”

“The truth of discerning between Law and Gospel,” Mr. Hopgood writes, “if it is to be the essential element of Christian identity that we Lutherans have held it to be, must be a bond used to unite a diversifying and changing church.”

Alongside these student submissions we include our regular features. Frank C. Senn, who graduated seminary in 1969, recalls the transformations both church and society underwent during his formation and early career. “When I started college in upstate New York men and women lived in separate dorms, men wore jackets and ties and women wore dresses or skirts to dinner, and curfew was enforced,” he writes in this issue’s “As I See It.” “When I reached my last year in seminary in Hyde Park, draft dodgers were enrolled as seminarians, students were smoking pot in their apartments, and many were hooking up (as they say now) in various sexual combinations.”

Since people who, for whatever inscrutable reasons, did not choose to attend seminary in pursuit of their vocations inform the context in which we do ministry, I invited Alex Waller, an engineer, to imagine how we will interact with the experience of our neighbors in a world where information technology has become intimately entwined with our physical being. “How will Christians address the suffering of people in poor countries if we are capable of literally feeling their starving bellies?” asks Mr. Waller (who is, in the interest of full disclosure, my brother-in-law).

Looking both backward and forward we face again the humbling truth that our human future is shaped by forces and events we can neither control nor reliably anticipate. We are thus reminded to be grateful that God continues to call faithful servants to the church’s work, that the Word may endure through and beyond all testing.

As always, we encourage and invite continued conversation on every topic raised by this issue. Contact us through our Respond page and join the dialogue. 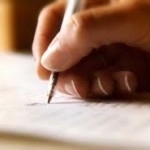