You are here: Home / Whither Lutheranism / So What’s the Lutheran Brand? Commenting on a recent spate of major media articles describing conversation to Roman Catholicism as a sort of trend in some avant-garde social circles, writer B.D. McClay (herself a Catholic) clarifies that while Catholicism is not cool, nor is it growing in adherents, it is a “brand.” That is to say, “if you call yourself Catholic, it corresponds to something in the head of the person you’re talking to.” Certain vestments, statuary, confessional screens, candles: a reasonably stable and clear set of images is going to present itself even (or perhaps especially) to people who don’t know much about the topic. The associations someone has with that set of images may be positive, negative, or indifferent, but it exists. In a limited way, McClay points out, this is true for Baptists (or “evangelicalism” as such), but not for, say, Methodism. She did not mention Lutheranism either way.

Is Lutheranism a brand? If it is, I suspect the brand does not extend much beyond the figure of Luther himself: a painting of the friar turned stout paternal burgher, a church door and a hammer posting something of unclear but great historical consequence, two mass-market films in the last seventy years. Dig a little deeper into the foundations of this image and we find a set of sayings that have been adapted as theological slogans (“sin boldly,” simul iustus et peccator), some colorful rhetoric that became downright monstrous on the subject of (to pick one highly consequential example) the Jewish people, and a historical setting of church conflict and corruption. There are, of course, much greater and richer depths below these, but from them we lose Luther the brand image and find the man himself immersed in theological debates and traditions in which he played only a partial role.

After this summer’s ELCA churchwide assembly approved a proposal to start the process of creating a new constitution (and hence a new church body), I wrote an essay sketching out four possible futures for this still-largest branch of the Lutheran movement in the U.S.: Confessional renewal, amalgamation with other Protestant bodies, decentralized federation, and cultural positioning. Implicit in those possibilities (and any others that did not occur to me) is a much more fundamental question I have not tried to answer: what is Lutheranism, anyway? Or perhaps more urgently, if less profoundly, what do we expect or hope anyone to picture when they encounter the words “Evangelical Lutheran Church in America”?

Formally, we have always been (and still officially are) defined by adherence to the 16th century evangelical Confessions that distinguish our movement from some official teachings of the Roman Catholic Church as well as from the Reformed, Anabaptist, and other Reformation-era movements. This definition leaves broad freedom for worship practices, however, so there is no coherent image of Lutheran worship to cultivate (as our Orthodox or even Anglican siblings have). I have heard more and more, however, and seen myself, that we do not in practice define ourselves this way.

Effectively we are defined by our constitution, both at the denominational level and by a certain concordance of local constitutions that, together, create a shared structure of cooperation and governance.

But materially, we are much more defined by our local cultures, which (as we might know from our fading “Lake Wobegon” branding) tend toward the remnants of northern European immigrant folkways and their middle-class white American successors. I wonder, in fact, whether “God’s Work. Our Hands” is unintentionally geared toward people conscientious and financially secure enough to want a part-time job volunteering for things.

So I’d say we have three self-definitions–a confessional definition, a constitutional definition, and a cultural definition. They interact in various ways. We may theologize our peculiar constitutional structure. We may dissolve the content of the Confessions into aesthetic affinity. And we may leave our relatively few Black, Latino, and Asian clergy and congregations in painful, even abusive limbo between a congregational polity that depends on historic housing wealth to function and a culture that can, intentionally or not, exclude them. To complicate things further, our younger clergy and ordination candidates are sometimes made to fend for themselves in housing and insuring themselves and (where applicable) their families. In many settings, a first-call pastor with school debt and no funds for a down payment on a home will be ministering to people whose average financial situation is so different as to constitute a cultural distinction of its own.

I don’t see how a new constitution will resolve any of these contradictions. But in a constitutional, rather than a confessional, church, a constitutional process should at least force us to ask what we want to be and how we want to be known. One early suggestion has been to remove the word “Evangelical” from our name. And it is, to be sure, an effectively dead word in our theological usage. It is fully a political and culture-war brand now and there’s nothing we can do about it.

But if we’re worried about that, there’s an even stronger case against “Lutheran,” an anti-Reformer slur that we adopted for reasons unclear to me. It’s not just that Luther’s shocking personal anti-semitism should not be either ignored or constantly explained in the process of making him our sole and defining icon. It’s not even that the word, if it has any purchase beyond our communities, carries with it outdated and harmful associations of coffee, hotdish, and passive-aggression. It’s that we can’t make Luther bear the weight we are asking him to bear. Bobbleheads, portraits, busts, “Nailed it!” Wittenberg door memes–I increasingly wonder whether these are figures of absence, brand images without content.

The Before I go further and talk myself into making a case against “Church” and “America” (which would not be all that hard to do), I want to offer this strictly as a thought experiment: If we chose to free ourselves from the name as well as the constitution, what would we want the new name to be? If we didn’t have to be evangelical-but-not-like-that, or here’s-what-I-mean-by-Lutheran, what would we think mattered enough to put on our logo and letterhead? What image would we hope to evoke in the mind of a stranger encountering our church signs? Or in each other’s minds when we have to work out a statement of common purpose or a structure of ministry? What do we want people to Google?

I can think of my own answers. I love how being a Lutheran (or, if I follow my own logic, a “Lutheran”) gives me an unconditional but critical relationship to the ancient catholic Christian tradition, structures my worship and prayer life through the external Word and the reliably effective Sacraments, and clarifies my moral striving through the lenses of Law and Gospel. If you’re reading this, you probably have your own answers.  I also love “Beautiful Savior,” Thorvaldsen’s Jesus statue, and yes, hotdish. But I don’t need anyone else to love those things with me. Knowing who we are begins with knowing what we love enough to try, even at this late date, to share.

The Rev. Benjamin Dueholm is pastor of Christ Lutheran Church in Dallas, Texas and author of Sacred Signposts: Words, Water, and Other Acts of Resistance (Eerdmans). He is a previous author on Let’s Talk as the regular writer of the “On the Way” column and a regular contributor of The Christian Century. 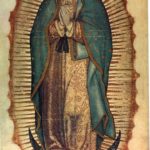