You are here: Home / Where is death’s sting? Where, grave, thy victory?

No one captures the squeamish nature of this issue’s topic better than Woody Allen, whose quote tops a (shamelessly) googled list of famous quotes about death: “I’m not afraid of death; I just don’t want to be there when it happens.”

The duty of showing up to the sites of death — hospice centers, bedsides, funeral homes, church parlors, to name a few — falls, in part, upon the church. Church professionals are there when it happens, or at the least are called into conversation with death and all its sting. A minister’s identity and relationship to the craft is intricately woven into the reality of death.

As our writers articulate the over the course this issue, meaningful pastoral presence within these spaces is important, and the effects of such a presence last well beyond the immediate events. Invitation into these spaces is among the most privileged components of pastoral identity.

What follows, then, is a series of arguments for serious theological examination and intention employed within these death-spaces. This particular constellation of articles orients and affirms the reader toward death, which is the opposite of the innate human response known in the discomfort of Allen’s quote.

In addition to approaching this issue as scholars and theologians, our writers pursue death and its implications from the perspective of those who’ve occupied these spaces over time in a seasoned capacity.

Our regular columnists, Ben Dueholm and Frank Senn, lay the foundation for the material that follows. Articulating what is at stake at the core of this issue, Dueholm writes, “death, it must be admitted, is on a pretty impressive run versus humanity. The all-time record stands at roughly 100,000,000,000 – 1 (I’ll leave the cases of Enoch, Elijah, and the Blessed Virgin Mary to the experts).” He examines the ways we do and don’t—and should and shouldn’t—control death, reminding us that we are always suspended between freedom and contingency.

Senn, likewise, wades through 20,000 years of burial rituals and death practices, drawing encyclopedic attention to the historic realities of dealing with decaying human bodies. “When it comes to death,” Senn writes, “we tend to focus on the soul, about which we know little, and ignore the body, about which we know a great deal.”

Gordon Straw offers a reorientation of death’s finality by examining the importance of place within the identities of Native American communities. Straw writes, “It is a fundamental belief that the continuity of a place is founded in the interplay of relations of history, peoples, nations, geography, spirituality, and living in a good way in that place. To isolate any of these relations and give priority to it destroys place and replaces it with an isolated, abstract conception.” Expanding the implications of death into the realm of place, Straw demonstrates the disruption of identity that takes hold after death. Death’s sting is felt when not only human lives are ended, but also when physical places are disrupted.

Church professionals know that rituals surrounding death can have lasting impacts on the relationships of the living. Amy Zeittlow draws on her research with blended families and their experiences of funeral seating arrangements. Details such as where step-children sit at a funeral are easily underrated but of terrific consequence. Ziettlow’s insights prove an invaluable tool in dealing with the seemingly innocuous yet ongoing realities of the living as they ritualize the dead.

Suzanne Kelly, whose experience includes rigorous academic examination of our topic and the daily hands-on perspective of running a green burial ground, explores the untapped opportunities arising between the aims of green burial practices and spiritual communities. “The green burial movement is, of course, about redirecting our deathcare practices in an attempt to mend them,” she argues. “But the movement is also a repair at the level of meaning.”

While Kelly locates repair in the points of connection between the sacred and the secular, Nathan Corl Minnich calls into question the insidious way in which cultural expectations and personal discomforts can dislocate theology from death practices. Minnich’s experience as a fifth-generation funeral director and an ordained pastor lends him unique perspective into the junction between funeral practices and ministry. The way we care for our dead shapes how we live together in Christian hope, he reminds us. “Helping to express our grief by remembering one who has died—publicly within the church, and with the body present—may revive the community’s participation in mourning. Interacting with the body acknowledges that death is real, upsetting, disrupting, and full of chaos; yet, by proclamation of the church, it is defeated!”

Two reviewers examine recently published texts that dig even more deeply into the sting of death, reveling in the conclusions of authors who employ curiosity and ambiguity in their search:

Seth Moland-Kovash, reviewing The Work of the Dead: A Cultural History of Mortal Remains by Thomas W. Laqueur, asks, “What meaning do we give to life by our rituals?” This text, he argues, demonstrates the tangled nature of ritualization surrounding death and the way in which life proceeds for the living thereafter.

Erin E. Clausen reviews Night Comes: Death, Imagination, and the Last Things by Dale C. Allison, an eschatologically oriented, and imaginatively driven, text which conveys the challenge of evidence in death examinations. Wading into this work, which the author states is “intentionally and necessarily incomplete” from the outset, requires patience and the occasional risk of ambiguity. Our reviewer offers advice for those readers seeking methodological clarity: “Allison’s guiding principle is that which offers hope.”

Finally, in an introductory passage from Peace at the Last, graciously provided for reproduction here by Augsburg Fortress, Paul Palumbo reflects on the often-underestimated power of accompaniment of the dying in a church that, itself, is experiencing a sense of loss in these days of declining membership. He writes, “I also believe this: if the church dedicated itself to just one thing, to accompanying the dying well, it would not be wrapped up in the anxiety of whether or not the church itself was going to survive.” Written as a liturgically and artistically oriented resource for use by laypeople and pastors during the visitation of the dying, Peace at the Last may be one of the least assuming, yet most timeless, books recently published for pastoral use.

All of the articles in this issue are provocative, and we anticipate that their differing viewpoints will give rise to fruitful conversations about Christian responses to the reality of death. We invite you to join in that conversation. Let’s talk! 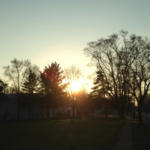