You are here: Home / Food and Justice / After the Harvest: A Church Journeys Beyond the Community Garden 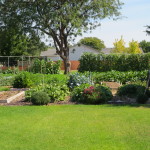 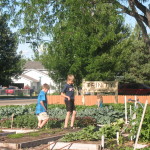 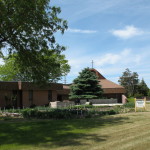 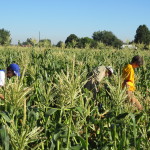 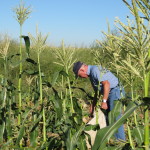 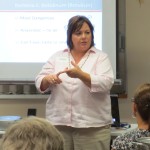 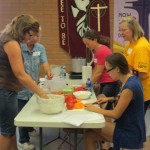 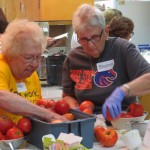 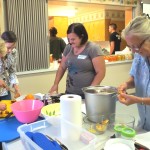 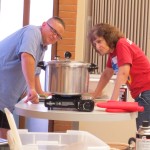 Trinity Lutheran Church, Nampa, Idaho’s journey with food preparation and preservation began in the kitchen.  In 2010 we, like so many community gardens in Southwest Idaho, were distributing thousands of pounds of fresh produce to food banks and food pantries, our own pantry included.  Looking from our cupboards full of canned and boxed food to our refrigerator with shelves of cabbage and kale, I realized that I barely knew how to prepare the food in the fridge.  If I didn’t know, then our food pantry clientele probably didn’t know either.  And that was just basic cooking, not the important task of making those veggies taste delicious.

In many ways we had a wonderful problem.  The 2008 recession had created a larger food stamp and food pantry client population (The unemployment rate for Canyon County is about 7.5 percent; the poverty rate is 20 percent.  In Nampa School District, 57 percent of the students qualify for free lunches.)  The processed food epidemic was also catching speed.  And in the middle of it all there was suddenly an abundance of fresh produce for the whole population—what a blessing.

Trinity Lutheran Church was involved in hunger ministries long before Trinity’s community garden was planted.  For many years the congregation had been providing leadership for the annual CROP Hunger Walk, serving at the soup kitchen, and distributing food baskets for Thanksgiving and Christmas.

Then in 2008, soil was tilled, sprinklers installed, raised beds built, and seeds planted.  The original Trinity Community Gardens (TCG) plot was planted in the congregation’s backyard. Soon the ministry expanded to additional garden plots on properties of the congregation’s members and then grew to gleaning the fields of local commercial vegetable gardens. Southwest Idaho’s high desert climate, combined with plenty of irrigation, lends itself to good growing conditions for both commercial vegetable farmers and community gardens.  In 2013 TCG gave away 3,509 pounds of produce from the gardens and another 9,961 pounds of gleaned produce.  This food ministry was life-giving to the congregation, the community, and of course the people we were feeding. But Trinity Lutheran Church is always asking, “What’s next?  Into what new thing is God calling us?”

As we sought to expand, we looked to community partners.  Collaboration has been the most important factor in Trinity’s ministries.  When we in the church use the word collaboration we are often referring to ministry with other congregations.  During the church seasons of Advent and Lent you will find Lutherans eating meals with other Christians before or after we worship together.  It is also common for Christians to hold joint Vacation Bible Schools.

What about collaborations with other organizations?  Lutherans and other faith communities have rented or given space to groups for years.  How many AA meetings are held in churches every week?  For over a year Trinity has been hosting the Nampa Children’s Theater.  As important as these ministries of hospitality are, I would not categorize them as collaborative.

Many congregations partner with schools–providing meals, after school activities, and mentors.  Congregations also house preschools, with varying degrees of connection to the congregation.  We also invite YMCAs and self-employed instructors to teach Yoga and Zumba classes, in attempts to promote healthy lifestyles and fellowship.

But when it comes to food, we sometimes need a different kind of expertise.  State University County Extensions have the potential to be great ministry partners for ELCA congregations.  We Lutherans seem to embrace hunger ministries and the Extension educators know a great deal about food.  Trinity has hosted a Victory Garden class (six consecutive Tuesday evenings) and a Junior Master Garden class for several years, all programs of the University of Idaho Extension, Canyon County.  TCG was planted and is run by three Advanced Master Gardeners.  So when I started wondering about resources for food preparation I turned to Ariel, the Extension horticulturalist who taught the Victory Garden class.

My original dream involved an ELCA Domestic Hunger Grant which would help purchase or create a cookbook for our food pantry clients.  I approached Ariel in the summer of 2012.  Was there a cookbook for produce grown in Southwest Idaho?  Could someone adapt it, making the recipes really simple for food pantry clients?  Ariel couldn’t remember hearing or seeing such a cookbook but she thought it was worth pursuing and believed it would be a great collaborative project.  Our final guidelines for each recipe were: six ingredients or less, not counting salt and pepper, with the main ingredient being produce grown in Southwest Idaho (so please no pot-roasts which happen to include carrots and potatoes).

Ariel also suggested including Joey Peutz, an Extension nutritionist who taught food preservation classes.  Maybe there could be another component to the grant.  I envisioned food pantry clients who could use Trinity’s kitchen or borrow equipment and preserve produce for the winter.  But the naiveté of this idea became clear in a few short months.

Joey had been to Trinity to do a quick intro to food preservation towards the end of Ariel’s Victory Garden series.  She suggested that the Extension absorb the cost for three Trinity Lutheran Church members to be certified as Master Food Preservers, also known as Food Safety Advisors.  We hoped that three additional Advisors could then be trained with funds from the Domestic Hunger Grant, now titled “After the Harvest.”

In the spring of 2013, four Trinity members were certified.  After learning about food preservation for six consecutive Tuesdays, they were convinced that people using food pantries are not generally thinking six months ahead to when they’ll go to their own kitchen pantry and find preserved produce.  They might not even have a place to store the food and they could be in a different living space in a few short months.  I was nervous, not wanting to stray from our grant proposal. The four Master Food Preservers assured me that they still wanted to host a 3-week home food preservation course at Trinity.  If the classes equipped even a few people to eat healthier, there would still be an impact on the food culture of the Treasure Valley.

The TCG gardeners and Master Food Preservers purchased seven canning sets and twelve jars per participant to be used during the classes (Home Canning Made Easy, Hands-on Pressure Canning, and Freezing).   Most of the produce came from the TCG.  Students were charged a fee, with scholarships available, because, as we knew all too well, a fee would motivate people to stay committed.  Fees would also make the program self-sustaining.  The series was advertised everywhere with a goal of 16 participants.

Some participants found out about the class through church newsletters, others from an ad in the local newspaper, still others were graduates of Extension gardening classes.  The week before our first class we actually had to turn a few people away, which was unfortunate for them but our team shared a collectively sigh of relief that the class would be full.  Joey gave the lectures and she and the four Master Food Preservers taught the labs so that we had five different foods being preserved each evening.  We had a blast—learning, getting to know one another, telling stories, making a mess, and then looking proudly at what is called “product.”

Meanwhile, Ariel was moving ahead with the cookbook project, which was about to get much bigger.  She happened to sit in on an Extension meeting with Rhea, who is part of a team of educators who have begun creating brochures about produce grown in Southern Idaho.  The brochures were part of the Eat Smart Idaho Program, whose purpose sounded like it came straight out of our grant proposal. 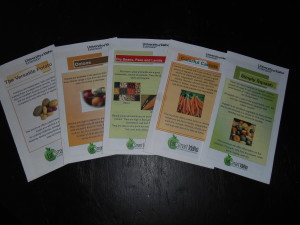 When Ariel saw these brochures she thought of our cookbook project. Suddenly our goal of giving people cooking instructions for Kale and Cabbage had evolved into something better than Ariel and I could have dreamed of when we wrote the grant proposal.  There is something powerful about the word extension.  In Canyon County, the University of Idaho Extension, Trinity Lutheran Church, and TCG have become extensions of one another and we are all better for it.  Collaboration can either speed up or extend the life of a project.  In our case it’s ended up being the latter—the cookbooks will come out in late summer 2015 instead of 2014.

From its founding, Trinity Lutheran Church has taken seriously the promises and mandate at the Lord’s Supper.  We trust that many gifts are received in the sacrament:  forgiveness, new life, nourishment.  In the post-communion prayer we ask God to strengthen us “to serve all in need and to give ourselves away as bread for the hungry.”  During this brief period in the life of the congregation we have carried out the mandate by focusing on equipping people so they can eat tasty and nourishing food as often as possible.

We have been blessed with great partners who have expanded our ministry in surprising and wonderful ways.  We realize that our story is our own but it is not unique and it is not finished.  This past winter we showed the film “A Place at the Table” in our sanctuary and then moved into the fellowship hall for small group discussions with leaders of the Nampa community, all part of an effort to stretch ourselves into a new area: advocacy.  We also know that once our cookbook is finished we need to start cooking classes, or start publicizing free classes being taught at other churches or agencies.  Meanwhile, we will gather together week after week to be in conversation with God: to hear the hear the Word, pass the peace, give thanks and praise, confess what we have done and left undone, pray, and share the bread of life and cup of salvation.

As you depart from church each week, fed and nourished, what are some specific ways in which God calls you to serve all in need and give yourself away as bread for the hungry?

How might the creativity and collaboration modeled by Trinity Lutheran Church inspire your own congregation to alleviate hunger through ongoing relationships that continue “after the harvest”?

Meggan Manlove serves as Pastor of Trinity Lutheran Church in Nampa, Idaho. Her blog, Welcome to the Table, can be found at http://megganmanlove.com.