You are here: Home / Reflecting Faith in Worship: The Use of the Means of Grace / Recapturing the Importance of Sunday

In considering The Use of the Means of Grace: A Proposed Statement on the Practice of Word and Sacrament, the voting members of the 1997 Churchwide Assembly will do nothing less than consider the very essence of what it means to be the Church of Jesus Christ. [This issue of Let’s Talk was put together before the Assembly.] For Lutherans, who define the Church as the assembly of believers gathered around the Word proclaimed and the Sacraments rightly administered, this conversation should be of ultimate importance. Unfortunately such conversation has virtually been silenced by preoccupation with the ecumenical decisions (also important, of course) also placed before the assembly in August.

Interestingly, however, the debate that has occurred regarding the practice of Word and Sacrament among us has centered not on the issues of infant communion, the frequency of celebrating Holy Communion, or even the means of distributing the Sacrament. In part this may be due to the fact that the document is understood to be descriptive rather than prescriptive of worship practice in the Evangelical Lutheran Church in America. That is, The Use of the Means of Grace seeks to support liturgical practice throughout this church by describing appropriate usage rather than attempting to legislate it. Some will argue that this is the document’s fatal flaw. But it is also the reason that the document is likely to be approved in Philadelphia, precisely because it does not attempt to force congregations to adopt a specific custom. Given the fact that less than one-quarter of the congregations of this church celebrate the Eucharist weekly is just one example of how difficult such legislation would be if attempted.

The disturbing nature of the debate which has occurred, however, centers around the centrality of Sunday as the day for Christian worship. In transmitting The Use of the Means of Grace to the 1997 Churchwide Assembly, the ELCA Church Council listed only one recommendation for editing the text of the document, namely that the word “Sunday” be deleted from principle number seven, a reference to the reading of the Holy Scriptures as part of worship. The concern expressed by many is that mid-week worship services or Saturday evening services will somehow be diminished if reference is made especially to worship on Sunday.

But as Gordon Lathrop reminds us in Holy Things, for Christians Sunday is the original feast day, a true celebration setting this day apart from all others in the week. As the first day of the week, images of creation and light shape our understanding of this day. Because Sunday is also the day of resurrection and serves as a constant reminder of the central importance of Easter to the entire year and to the events of our redemption. Hence Sunday has traditionally been considered the “eighth day” (John 20) of the week, complete with images of breaking open a good but fallen creation in order that all of us may be transformed by the power of Jesus’ resurrection as the community gathers for worship. In a very real sense, the life of the baptized constantly flows from this day and brings us back to it, consecrating the week and hallowing all of life and vocation.

Clearly there are often sound pastoral reasons for scheduling worship on a day other than Sunday. Increasing numbers of people, for example, are required to work on Sundays, making attendance at worship impossible. Others travel on the weekends and appreciate the opportunity to worship during the week. I certainly do not want to advocate for the elimination of these worship opportunities. But I do believe there is a disturbing trend leading us away from a full appreciation of the centrality of Sunday for Christians. One needs only to look at the high levels of participation at Saturday afternoon “masses of anticipation” in the Roman Catholic Church for confirmation of this growing practice. Frankly, the centrality of Sunday is also endangered by rubrics governing the calendar in Lutheran Book of Worship. The unique (dare I say peculiar) Lutheran practice of allowing lesser festival and commemorations to supplant Sundays when the color of the day is green is not helpful in focusing our attention on the importance of Sunday.

The anticipated adoption of The Use of the Means of Grace by the 1997 Churchwide Assembly is indeed a teaching moment in the life of the Evangelical Lutheran Church in America. The document strongly asserts the grace-filled inheritance of the baptized, the central place importance of the proclamation of the Word of God in the gathered assembly, and the centrality of the Eucharist in the life of the faithful. It promises to be an effective teaching tool both in shaping the worship practices of congregations and for instructing new believers about the means of grace. My plea is that we are likewise intentional about including in our catechesis regarding the assembly of believers a strong emphasis on Sunday as the day on which the faithful gather as reminder of our creation, redemption, and sanctification by a gracious and loving God. 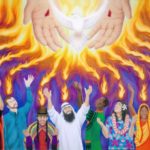