You are here: Home / Ecumenism / The Foundation: Finding Unity as Biblical People of Promise

Let’s talk! This is a good name for this newsletter and it is the point of this article on Jewish-Christian Dialogue. I maintain that this Jewish-Christian dialogue, because it traces its origin from the Scriptures of both traditions, and necessarily “returns” to them, is foundational for all ecumenical and inter-faith dialogue.

Both Jewish and Christian canons of Scriptures developed during the first century of the Common Era, a “dialogue leading to division.” Some might object to my use of the word “dialogue” in this way. As a peace negotiator or marriage counselor knows, disagreement can be a strong form of unity! The question for Christians is whether, until the Messiah Jesus comes, dialogue with Jews can foster mutual respect and reconciliation.

The first example of a Biblical attempt to answer this question is from the Gospel according to St. Matthew. The Adult Forum class in my congregation, Wilmette Lutheran Church, learned from Dr. Edgar Krentz of Lutheran School of Theology at Chicago that Matthew reflects a struggle in the first generations after Jesus between the church and the synagogue as they separated from each other. Matthew functioned as an appeal for Jewish-Christian understanding until Jesus comes again. The name for Jesus, “God with us” or “Emmanuel,” appears at the beginning and end of the Gospel (Mt. 1:23 and 28:20) to encourage Christians and Jews to seek mutual understanding “until the end of the age.” No mandate is given for one to dominate the other. The promise rather served as a source and support for the evangelizing mission of spreading the Gospel of Jesus as the Christ (Messiah) of the world, without taking away one jot or tittle from Torah (Mt. 5: 17).

Like Matthew, St. Paul’s letter to the Romans served as both a call for Jewish-Christian mutual respect and as an exhortation to support Paul’s apostolic mission to the known world (the oikoumene, or “inhabited world” as far as Spain; see Rom. 15:24, 28). Paul’s apostleship and call to spread the Gospel to the Gentiles derived from the Gospel of Jesus Christ, “the power of God for salvation to everyone who has faith, to the Jew first and also to the Greek.” According to Paul God’s gracious mission to justify the ungodly by faith in Jesus Christ began with the election of Abraham. God called Abraham who was justified by his faith in the promise. Outreach to Spain was connected to inreach to Jerusalem. In other words, mission and dialog could not be separated from each other, even though they are distinguished. The Gospel, the proclamation of Jesus Christ as Lord and Savior of the world, served simultaneously as a declaration of reconciliation between Jews and Gentiles (see also Gal. 3:28).

Romans 9-11 is where the apostle doxologically links his mission to the Gentiles with God’s faithfulness to Israel. For Paul, Israel’s “no” to the Gospel only confirmed the mystery of God’s “Yes” to both Jews and Gentiles in Jesus Christ. In my experience of Bible study, to say that the Jews by their election as children of promise support us Gentile believers (Romans 11:18) is shocking to most Christians. It should be scandalous and shocking. It is the Gospel!

The history of contempt for the Jews is directly related to the offense Christians have taken at the Gospel of Jesus Christ. For example, Marcion (d. ca. 160 C.E.), who proposed that Christian identity no longer depended on the Jews and their Scripture, represented the heresy of those who maintain that the dialogue is over between Jews and Christians. The Christian church has superseded Israel, Marcion maintained; and so he sought a Christian unity of a “de-Judaized” kind. He read the “Bible,” which for him was selected writings of Paul and the Gospel according to St. Luke, in a very narrow way. The importance of Biblical canon (the Books of the Bible considered authoritative) and hermeneutics (principles of interpretation) are compromised whenever and wherever the Gospel is de-Judaized.

What is most obvious is how little voice Marcion gave to Judaism as a people bearing God’s promise. Interpreting Matthew’s Gospel, he denied that Jesus was “in the end” a Jew and claimed that Jews had changed Jesus’ Sermon on the Mount to reflect the opposite of what Jesus meant. To Marcion Jesus meant to say that he had come to destroy the Law. Marcion also badly misinterpreted Romans, denying the gospel and scriptural connection between justification and election. Fortunately, the early Church confessed that Jesus was indeed a Jewish boy who grew up to be a rabbi and that Jesus never rejected Torah or his own people!

Martin Luther, who wrote so fondly of the Jews in his early career, did so because he was lifted up by the gospel in his reading of the Scriptures. We can see this in his treatise of 1523, “That Jesus Christ was Born a Jew“. The title is so significant here, because it implies a datum of history that cannot be transcended. In this writing Luther asked: How can we so mistreat the Jews, when our Lord Jesus Christ was one of them? After all, he says, “We are aliens and in-laws; they are blood relatives, cousins and brothers of our Lord.” “If we really want to help them,” he writes, “we must be guided in our dealings with them not by papal law but by the law of Christian love. If some of them should prove stiff-necked, what of it? After all, we are not all good Christians either.”

It was exactly 20 years later, in 1543, that Luther penned a very different treatise, with a very different title: “On the Jews and Their Lies” (Von den Juden und ihre Luegen), the title indicating that Luther had sunk into the contempt so typical of most of Christian history. In his role as a reformer, however, Luther maintained that if the Catholic Church were purified, the Jews would eventually convert to Christianity. Thus, breathing the stench all around Europe, Luther also fell prey to simplistic notions about the Jewish “no” to Jesus as Messiah. Would he have maintained this calumny and false witness if, while preaching and teaching the biblical gospel, he had respected and talked regularly with Jewish people? We can only speculate! In his later years, Luther’s quest for a simple account of his historical moment, unsupported by Scripture, became the seeds of his wild raving against the Jewish people.

This biblical gospel is the heart of the Word and Sacrament, which we Lutherans believe (Article 7 of the Augsburg Confession). It forms the sole basis for any and all Christian unity and communion. Christians have an “irrevocable call” (Romans 11:29) in relationship to the Jews to keep the dialogue going until the day of Jesus Christ.

“There is finally only one really great ecumenical question: our relations with the Jewish people,” said Karl Barth, the great Swiss theologian.. As Lutherans of the Evangelical Lutheran Church in America face important questions about Christian unity with the Reformed and Episcopal communions and about the lifting of condemnations against the Roman Catholic Church, it would be tragic if we forgot the Scriptural treasure provided in Jewish Christian dialogue.

The Church of Jesus Christ as such (One Holy Catholic and Apostolic) depends on an ongoing dialogue between Jews and Christians. If we are to pay more than lip service to the Sola Scriptura principle, we will not take lightly this call to dialogue with our elder brothers and sisters in the promises of God.

A first requirement of dialogue is humility, and certainly not the kind of humility we seek but the kind that is graciously imposed in the limits of historical life. I speak as a “second child” in the birth order of my family. So do all Christians of Gentile background. The unity we receive by God’s grace is the blessing in and through, as well as in spite of our differences with each other. This does not compromise the truth or the unity which God gives!

Every principle of Ecumenical unity (Canonical, Confessional, Christocentric, Sacramental, Law and Gospel, and Two-Kingdoms) finds a unique biblical testing in the Jewish-Christian dialogue.

Christians have long ignored and minimized this mandate to be in reconciling dialogue with Jews. Christian unity, without a Jewish-Christian component, has typically and tragically taken priority. The horror of this century in the holocaust of 1938-1945 has brought Christians (and Jews) to see that we cannot ignore each other. Efforts to “de-Judaize” the world or the Church end up inevitably with blasphemy and apostasy.

Lutherans have acknowledged the special burden of Martin Luther’s anti-Jewish statements, although even the ELCA has yet to circulate the text of its own historic Declaration to the Jewish Community to all congregations through The Lutheran and other means. To be sure, because Lutherans and Jews often do not live in the same regions and neighborhoods, many congregations cannot carry on face to face dialogue which supplement the dialogues carried on by the ELCA on a national level. However, this is not an insurmountable problem. The image of Jews and Judaism in the Christian Church as living partners in the journey of faith is the real issue. In sermons, Sunday School material, seminary curriculum, Biblical studies programs, and missionary strategies, we have denied Jews the right to speak for themselves to us about their self-identity and self-understanding. The long history of anti-Judaic and anti-Semitic sentiment, the systematic contempt, and the bad jokes, all stem from our denial of any ongoing meaning and importance to our common spiritual patrimony with Jews.
The fact that anti-semitism existed at the time of the New Testament is no excuse for us to be bedeviled by it today. The record of anti-semitism over two thousand years is a story of Christians (and others) seeking simplistic answers to the problems of this world, including Christian disunity, by scapegoating Jews

With all of the heady and important decisions coming on the ELCA’s ecumenical agenda in these next three years it may be tempting to ignore this “irrevocable call” at the heart of the gospel, and the living tradition which the Jews continue to share with Christians. The Jewish Christian dialogue has direct bearing on all other Christian dialogues and ecumenical efforts. Jews have always been suspicious of Christian efforts for reunion and revitalization. Why? Because they have been the losers.

We hope for a better understanding and deeper experience of the unity of Christ. It is good to remember that we are not making simple, either/or choices. By keeping the Jewish-Christian dialogue in view, we take the long view of our ecumenical agenda and we also find the greater mystery of being biblical people of promise.

So, let’s keep talking with our Jewish sisters and brothers! The blessings are many. 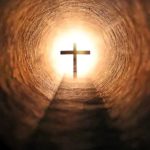